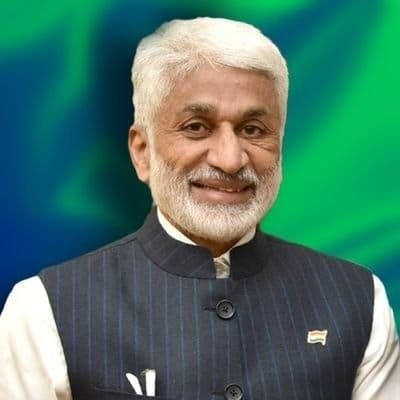 The MP from Andhra Pradesh will head the committee that covers the highest number of ministries. “I will surely replicate this performance in my new role as the Chairman of the Parliamentary Standing Committee on Transport, Tourism and Culture,” V. Vijayasai Reddy told ANI.

The coveted Committee has the mandate to scrutinise the functioning of the five prominent Ministries of Culture, Civil Aviation, Ports, Shipping and Waterways, Road Transport and Highways, and Tourism, having a combined budget of more than Rs 2.17 lakh crore.  Each of the five ministries under this committee is of utmost relevance in increasing connectivity, preserving culture and promoting tourism all across the country.

“My efforts will be focused on identifying and addressing subjects having social, economic, and cultural relevance for the nation as a whole,” he added.

The development came amidst a major reshuffle that took place in the parliamentary panels on Tuesday as Congress lost the home and the IT & communications panel, among others. According to an official notification, Congress leader Abhishek Manu Singhvi, who headed the home panel, was replaced by BJP Rajya Sabha MP and former DGP of Uttar Pradesh Brij Lal. Another loss for the grand old party came when it lost the committee on IT, chaired by Lok Sabha MP Dr Shashi Tharoor. The Eknath Shinde-led faction of Shiv Sena now has its chairman in three-time Lok Sabha MP Prataprao Jadhav.

The standing committee for environment and forests is currently chaired by MP Jairam Ramesh.

In another such development, the Samajwadi party’s Ram Gopal Yadav, who chaired the health committee, has been replaced by BJP MP Bhubaneshwar Kalita. The panel on education, women, children, youth and sports will now be chaired by BJP MP Vivek Thakur after its previous chairman, Vinay Shahastrabuddhe, retired. Senior Member of Parliament Jagdambika Pal is now the Chairman of the Energy Panel, whereas JDU leader Lallan Singh will head Urban Development.
The Trinamool Congress (TMC), which had one chairman in Lok Sabha MP Sudip Bandyopadhyay, will no longer have one.

Several vacancies were created in various committees with more than 100 MPs retiring from the Upper House recently.