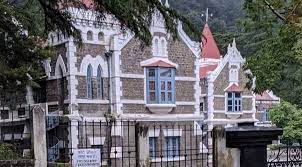 The Uttarakhand High Court in the case Birendra Singh v. Union of India and Others observed and has stayed till December 15, all construction and developments activities in Jilling Estate, a small village situated amidst untouched forests of Kumaon Himalayas.
The bench comprising of Chief Justice Vipin Sanghi and Justice R.C. Khulbe observed while perusing Google Map imagery which prima facie depicts green cover depletion, particularly in 8.5 hectares of the 36 hectares Estate. Thus, the 8.5 hectares area appearing to have a high density of forest cover in the range of 40% or even more. It has been observed by the court that since the court is looking Google Map pictures, obviously, the conclusion cannot be final. The court for prima facie evaluation, the court can certainly can take notice of these pictures. It can be seen in the pictures that even in the dense tree cover area, developmental activity has been undertaken as the roads or the paths appear broader which is clearly defined, and extended in their length.
However, the bench compared the images from the year 2015, 2018 and 2022.
The bench during the hearing was informed that Devanya Private Resorts employed a JCB machine to carry-out development activities in the 8.5 hectares’ area, which is being appeared to have dense tree cover and eventually may be declared as a Deemed Forest, sans permission. For resolving the issue of ‘Deemed Forest’. A fresh inspection of the entire Jilling Estate has been ordered by the Court.
Retd. IFS Dr. Dvijendra Kumar Sharma has been appointed by the court as the court Commissioner to carry-out the local physical on-the-spot inspection and furnish a report in two weeks. Adding to it, the court stated that till the next date, all further constructions and development activities in Jilling Estate shall remain stayed.
Accordingly, the court listed the matter for next hearing to December 15.