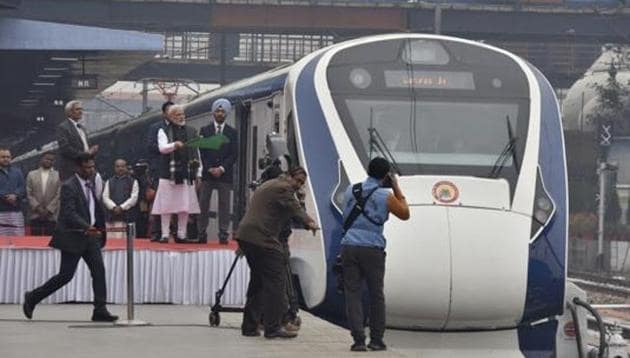 By achieving a speed of 100 km/hr in just 52 seconds, ‘Vande Bharat’, India’s semi-high-speed train, broke the record of the bullet train on its trial run between Ahmedabad and Mumbai on Friday.

Railways minister Ashwini Vaishnaw said it was a “proud moment for Indian Railways as the trial run of the third rake of the Vande Bharat train was completed and with a green signal from the Railway Safety Commissioner.”

The minister also talked about the ministry’s focus on not just producing trains but maintaining the tracks for running high-speed trains. He admired the new Vande Bharat express and said, “We have shown that a fully loaded water glass has not shaken at the speed of 180kmph, but it shook the world.” The minister also informed us that the production of the rest of 72 trains will start soon as the trial run of Vande Bharat has been successful.

A press release by the Railways ministry said that the new Vande Bharat trains would be equipped with WI-FI, 32-inch LCD TVs, energy-efficient ACs with dust-free clean air cooling, and a side recliner seat facility for all classes, which was earlier provided to just executive class passengers.

Man died after co-worker pumps air into his rectum