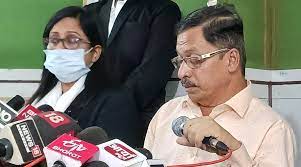 Vikas Walker, father of Shraddha Walkar who was allegedly murdered by her live-in partner, demanded the death penalty for accused Aaftab Poonawalla while also alleging that he faced “many problems” because of the Vasai Police.

Vikas alleged that if the Vasai Police had helped him, “Shraddha would have been alive”.

However, he added that Delhi Police has assured his family that they will get justice.
Addressing a joint press conference with BJP leader Kirit Somaiya in Mumbai, Vikas said, “My daughter was brutally murdered. I faced many problems because of the Vasai police, if they had helped me, my daughter would have been alive.” “Delhi Police assured us that we will get justice. Maharashtra Deputy CM Devendra Fadnavis also assured us of the same,” he added.

Seeking a probe against the family members and relatives of the accused, Shraddha’s father also demanded Aaftab be hanged till death.
“I expect a similar lesson for Aaftab Poonwala in the way he murdered my daughter. He should be hanged. A probe should be conducted against Aftab’s family members, relatives and all others included in the incident,” he said.

Pointing out the drawbacks and misuse of some mobile applications (dating apps), he also sought “restrictions” on them.
“There should also be restrictions on some mobile apps. Children older than 18 yrs of age should be somewhat controlled and they should be given counselling. What happened to me shouldn’t happen to anyone else. I tried to talk with my daughter but she didn’t respond to me in the last two years. I was never told what was happening with my daughter,” he said.