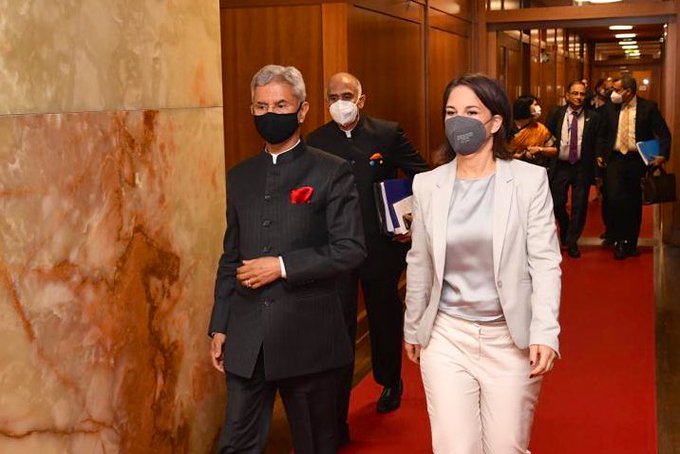 Earlier on Monday German foreign minister landed in Delhi and will be discussing cooperation on the transition to renewable energy and India’s relationship with Russia and China.

Taking to Twitter Ministry of External Affairs Spokesperson Arindam Bagchi tweeted, “A warm welcome to German Foreign Minister @ABaerbock as she arrives in New Delhi on her first official visit. An opportunity to exchange views on regional and global developments and review the progress achieved in the India-Germany Strategic Partnership.”

Meanwhile, cooperation in the energy transition away from oil, coal, and gas will also play a role in the two-day inaugural visit.

In the rural surroundings of New Delhi Baerbock will visit projects for renewable energies and sustainability on Friday, said German Federal Foreign Office.

However, India’s relationship with China will also be focused on during Baerbock’s talks with her counterpart Jaishankar.

However, Baerbock lauded the role played by India at the recently concluded G20 summit in Bali.

In a departure statement the German foreign minister said, “At the G20 summit in Bali (Indonesia), India showed that it is ready to play its role globally.”

German foreign minister further said, “The clearer positioning of the G20 against the Russian war of aggression in Ukraine is ultimately also thanks to India.”

“As an emerging economic power and a solid democracy, India is both a role model and a bridge for many countries in the world, despite all the internal social challenges. And a natural partner of Germany,” the German foreign minister said.