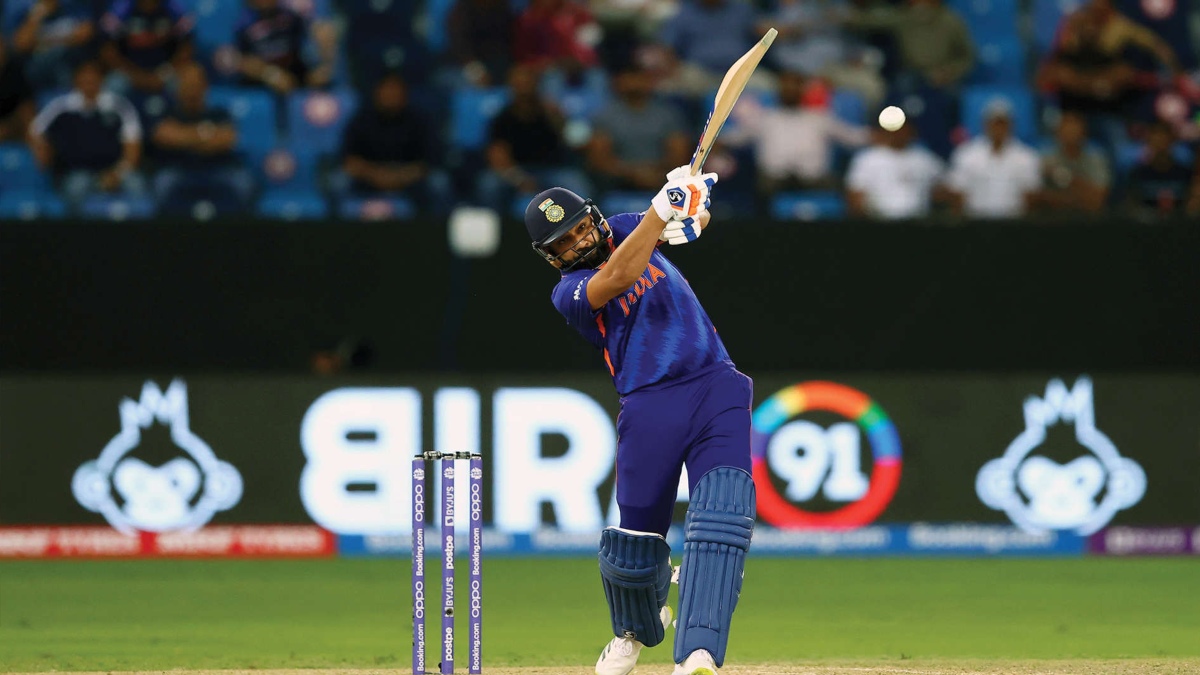 The All-India Senior Selection Committee has picked a 16-member squad for the upcoming T20I series against New Zealand. India is set to play three T20Is starting from November 17, 2021.

Rohit Sharma will be leading the side after Virat Kohli stepped down as the skipper of the T20I side. Kohli had the T20 World Cup as his last assignment as skipper in the shortest format of the game.

New Zealand will play a T20I series and then follow it up with two Test matches. The T20Is will be played on November 17 in Jaipur, November 19 in Ranchi and November 21 in Kolkata. The two Tests will be played in Kanpur (November 25-29) and a test match in Mumbai (December 3-7).

Meanwhile, From the T20 World Cup squad, Suryakumar Yadav, Rishabh Pant, Ravichandran Ashwin, Ishan Kishan, Bhuvneshwar Kumar have been retained and they will be seen in action.

Hardik Pandya has not been named in the squad and it is not known whether he has been rested or he has been dropped from the squad. The allrounder did not bowl against Pakistan in the T20 World Cup, and he returned to bowling action in the second game against New Zealand.

Kohli had stepped down as the skipper of the T20I side. Kohli had the T20 World Cup as his last assignment as skipper in the shortest format of the game. 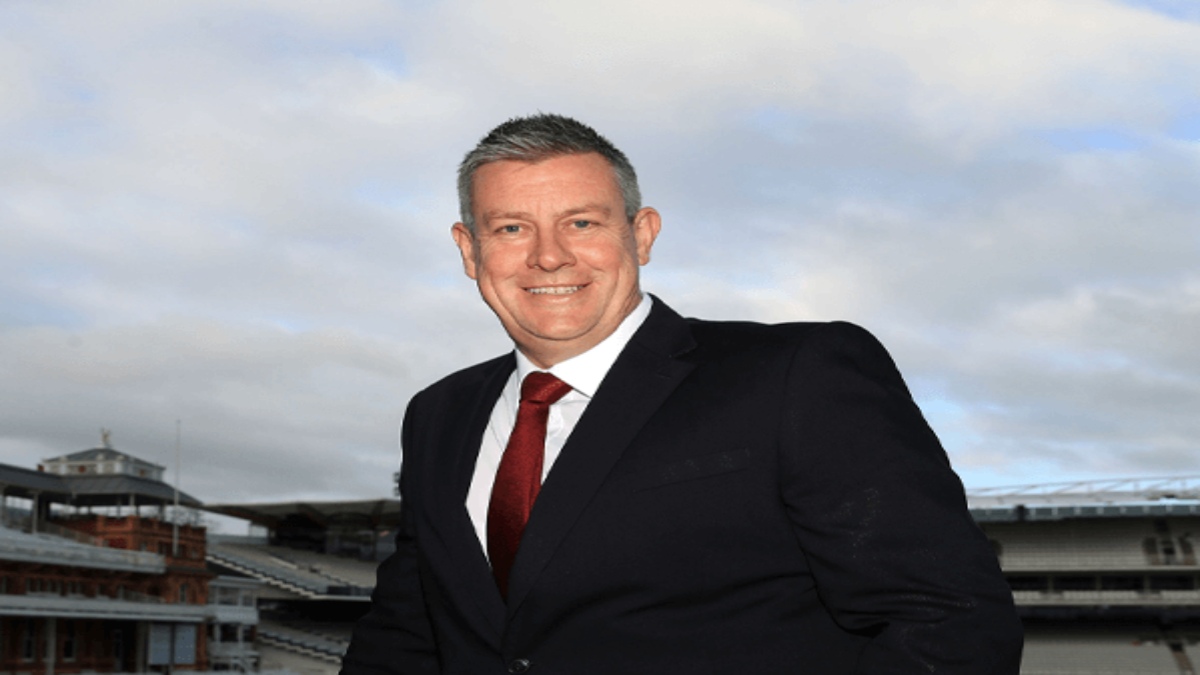 Ashley Giles, the managing director of England men’s cricket team has said that the side is hoping that the discovery of the Covid-19 Omicron variant does not affect anything in the upcoming Ashes.

“We’re obviously hoping it won’t affect anything. There are going to be changes to those border controls in terms of our families being able to travel and we clearly hope that’s not going to affect us. But we are in the hands of national and local governments,” ESPNcricinfo quoted Giles as saying. Different states in Australia have introduced new travel restrictions in response to the latest Covid-19 variant.

“We always knew things could change. I guess we hoped things would change positively as we went through the series but as we’ve been aware over the last two years with variants, things can also change negatively,” said Giles.

“Can we prepare for everything? It’s not really possible actually because of the big moving parts even around quarantine times and rules around different states. We will do everything we can to make sure the families are accommodated and of course that the players are happy,” he added. The Ashes is slated to begin on December 8 at the Gabba, Brisbane.

HAPPY WITH PERFORMANCE, BUT WIN WOULD HAVE BEEN ICING ON CAKE, SAYS IYER 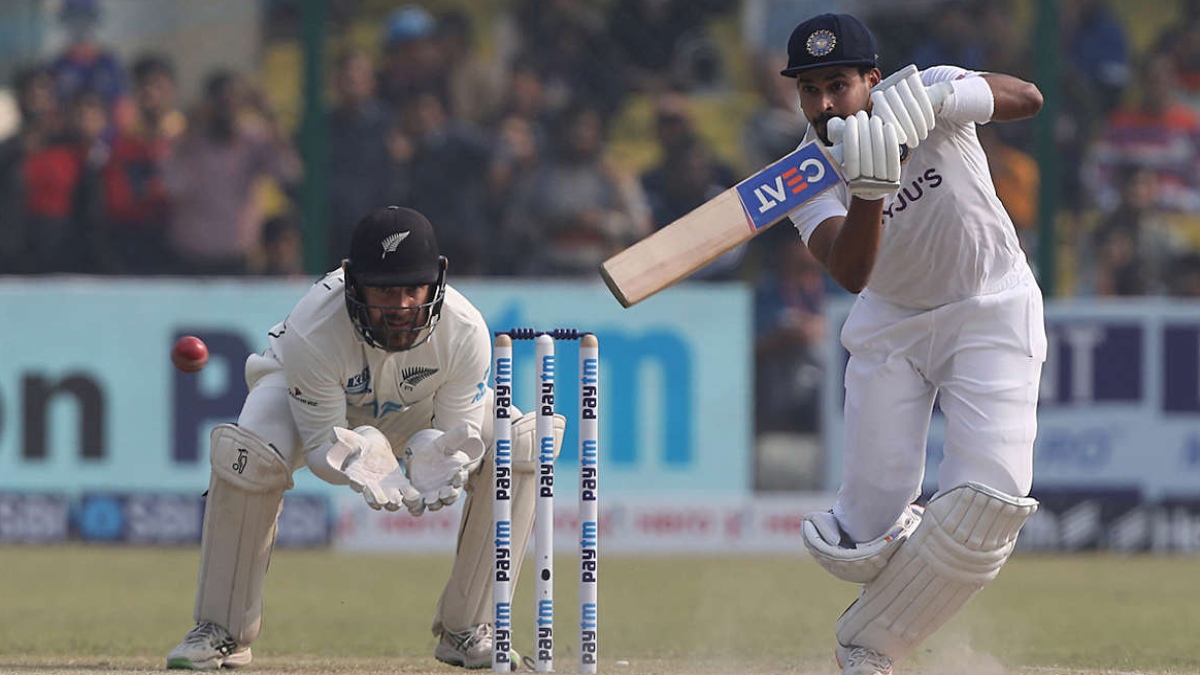 India batter Shreyas Iyer said that he is satisfied with the overall performance of the team, but the victory would have been like the ‘icing on the cake’.

The first Test between India and New Zealand ended as a draw on Monday after the visitors somehow managed to survive and the hosts ended the Test one wicket away from victory.

“It’s a great feeling, but would be the icing on the cake if we had won the game. You can see that the pitch is still intact. We bowled really well. The mindset was to play sessions and play as many balls as possible. People say I am a flamboyant player, don’t curb my instincts, but I was just looking to play as many balls,” Shreyas Iyer told host broadcasters Star Sports after the first Test ended.

“Enjoyed batting with Ashwin and Saha. Happy with the overall performance of the team. The pressure is always there. They got off to a great start. Once we got a sniff and got quick wickets, we made the best use of the situation,” he added.

Shreyas Iyer became the hero of the Test as he smashed his maiden century on the Day 2 of the first Test and again stole the show with his knock of 65 helping India in a position of command on day four of the Kanpur Test.

Coming to the match, New Zealand managed to survive by the barest of margins on the last day of the first Test against India after a gritty performance from their lower-order batters insured that visitors walked away with a draw here at Green Park, Kanpur on Monday. 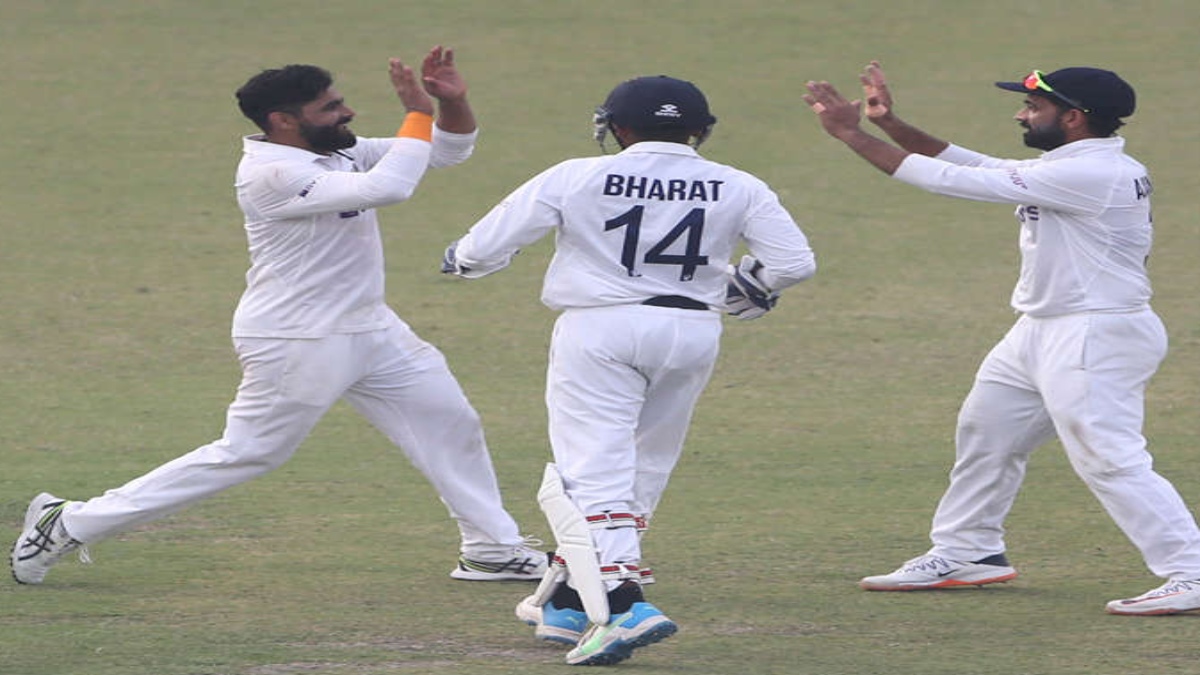 Indian skipper Ajinkya Rahane said it was a good game of cricket after New Zealand escaped with a draw on Day 5 of the Kanpur Test on Monday and defended the decision to declare late on Day 4.

New Zealand’s Rachin Ravindra and Ajaz Patel came up with a determined performance to hold off the Indian spinners in the final hour of the Test to earn a commendable draw as the hosts ended the Test one wicket away from victory. Talking in the post-match presentation, Ajinkya Rahane said: “[on the timing of the declaration] Not really, we tried our best. They played really well. I think the way we came back in the second session was good. The fast bowlers too bowled really well. We wanted to get that partnership going, put some runs on board. Saha and Axar batted really well. Before that Shreyas and Ashwin’s partnership was crucial. We wanted to bowl four overs yesterday and 90-95 in all. I don’t think we could have done anything differently.”

“The chat with the umpires was about the light. As a fielding team, you want to bowl more overs, as a batting unit you don’t want to bat in that situation. The chat was about the light, but umpires made the call and I thought they were right,” Rahane said about his chat after the stumps on Day 5.

“I thought on this wicket the spinners had to bowl long spells. It was all about rotating the bowlers and they bowled really well. I am really happy for Shreyas. He had to wait a long time for his Test debut. He batted really well. The way works, his record in FC cricket is really good,” he added.

“Virat is coming back for the next game. We’ll have to wait and see till the Mumbai game. I am not going to make any comments but the management will make a call,” Rahane pointed.The two sides will now face off in Mumbai for the second and the final Test of the series on December 3 with the score evenly poised. 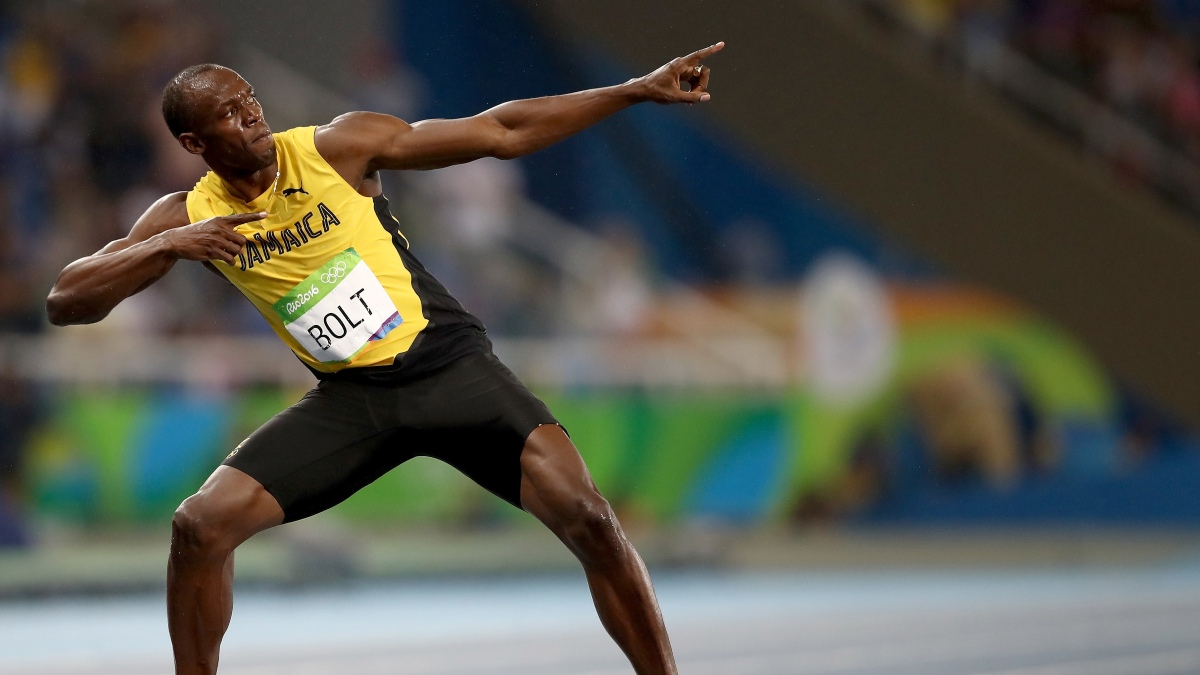 Eleven-time world champion and 8-time Olympic gold medalist, Jamaican athlete Usain Bolt attended the ‘Run the World’ event at Expo 2020 Dubai. The 1.45km Family Run was for charity and sent out a message that sports, health and wellbeing should be accessible and inclusive, representative of society at large. Usain Bolt has repeatedly challenged definitions of what’s possible – pushing boundaries, setting records and making history.

Ms. Essie Gardner stated, “The excitement generated by Bolt’s visit to the pavilion was electric. Patrons, adults and children alike, camped out at the pavilion hoping for an opportunity to meet the living legend. And he seemed to enjoy the tour.”

Bolt interacted with visitors, made himself available for photo opportunities and signed memorabilia. He spent time at his representation in the sports zone of the pavilion. He reflected on some of the moments captured on the display video and his maquette on show.

Acknowledged as the greatest sprinter of all time, Usain Bolt has his name inscribed on a multitude of world records. Jamaica has consistently swept Olympic sprinting events and continues to produce the fastest sprinters in the world. The country’s electrifying performance at the 2021 Tokyo Olympics validates its claim to athletic fame. “We have living legends that are there to encourage the kids and just being present. And this also adds to the success that you see at the Olympics,” said David Riley, President of the Jamaican Track & Field Coaches Association.

“Usain Bolt, who is Jamaica’s most decorated Olympian and arguably one of the best sprinters of all time, is one of the track icons motivating the country’s youth.”

WE SHOWED A LOT OF HEART TO BAT THROUGH DAY 5, SAYS WILLIAMSON 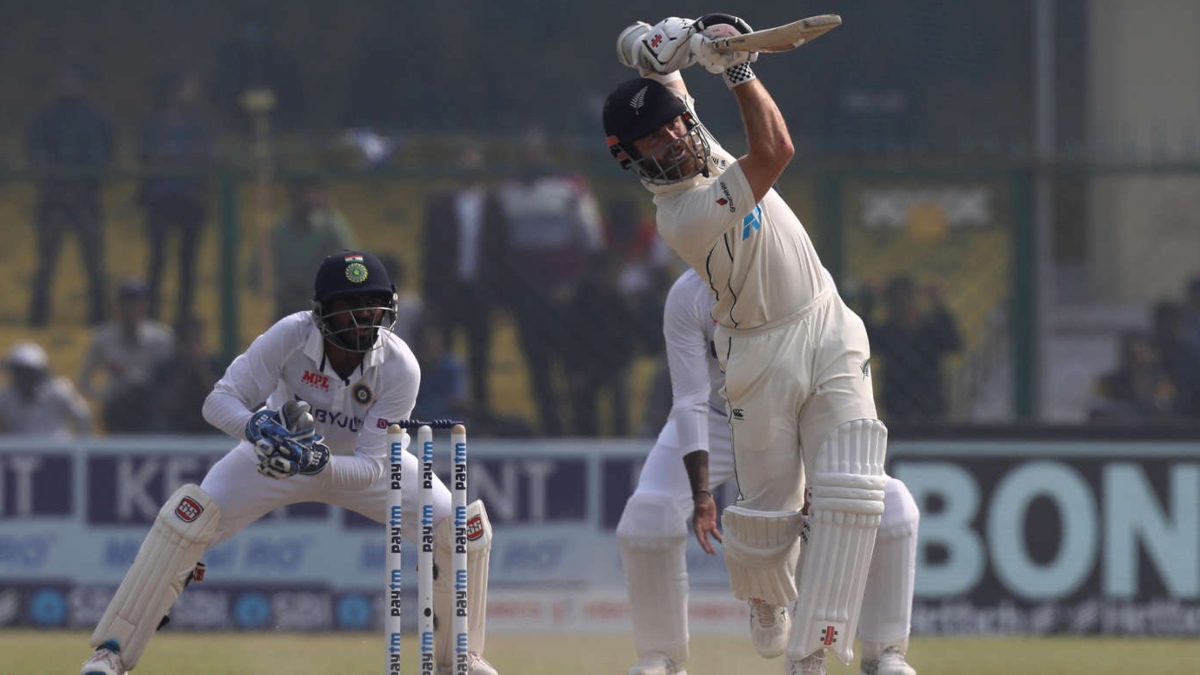 New Zealand skipper Kane Williamson on Monday said that his side managed to show a lot of heart to somehow survive on Day 5 of the first Test against India.

The first Test between India and New Zealand ended as a draw on Monday after the visitors somehow managed to survive and the hosts ended the Test one wicket away from victory. It has been touch and go around this time throughout the game. Terrific game overall. All three results were still at play. We showed a lot of heart to bat through the day. Some fantastic experiences for Rachin, Ajaz and Somerville. It was also nice to have a crowd here to see this game.

The two fast bowlers that did play were outstanding. Bowling long overs was an unbelievable effort. We know this Indian side is a very strong one,” Williamson told host broadcaster Star Sports at the post-match presentation.

Team India managed to take eight wickets on Day 5 of the ongoing first Test but some late drama and stout-hearted performance from visitors’ batters clawed back victory from the jaws of hosts.

Visitors manage to survive as match ends in a draw

Stout-hearted performance from visitors’ batters clawed back a draw from the jaws of defeat. 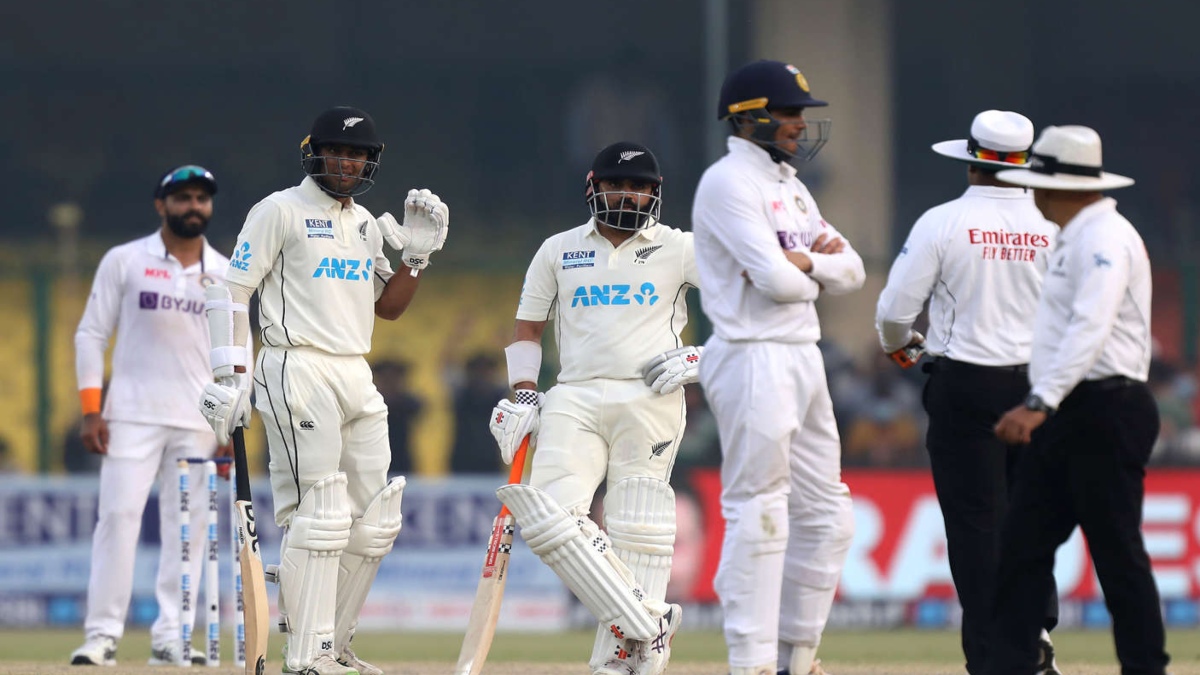 Team India managed to take eight wickets on Day 5 of the ongoing first Test but some late drama and stout-hearted performance from visitors’ batters clawed back victory from the jaws of hosts. Ravindra Jadeja scalped four wickets in the second innings while veteran spinner Ravichandran Ashwin returned with three.

Resuming the final session at 125/4, Indian bowlers clawed further deep as Axar Patel had Henry Nicholls adjudged LBW. Then after five overs, Ravindra Jadeja got the all-important wicket of Kane Williamson. The NZ skipper decided to go back and the ball skid on to trap him plumb in front. He departed for 24 off 112.

In the 79th over, Tom Blundell was bowled round his legs by Ashwin. India took the second new ball in the 84th over as the match reached the endgame. With the light fading and time running out for the hosts, Ravindra Jadeja struck in quick succession to send Kylie Jamieson and Tim Southee back into the dugout.

One wicket short, Indian bowlers threw everything at the batters on the pitch, Rachin Ravindra and Ajaz Patel. But Rachin who played 91 balls in the second innings ensured his side walked away with a draw.

Earlier, Team India managed to take three wickets in the second session on Day 5 of the ongoing first Test against New Zealand here at Green Park, Kanpur on Monday.At the tea break, New Zealand’s score read 125/4. Will Somerville (36) was sent back to the pavilion by Umesh Yadav in the 36th over of the innings and this brought skipper Kane Williamson to the middle.

Latham however marched on and he brought up his half-century in the 51st over of the innings. Latham (52) was bowled by Ravichandran Ashwin in the 55th over and as a result, the off-spinner went past Harbhajan Singh’s tally of 417 Test wickets. Ross Taylor (2) also failed to score big, and New Zealand was quickly reduced to 125/4.