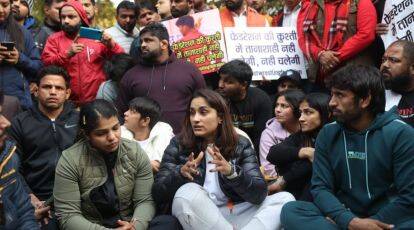 A petition has been moved in Delhi High Court against wrestlers who recently staged a protest against the Wrestling Federation of India President Brij Bhushan Sharan Singh, levelling serious charges of sexual harassment against him, and coaches of the federation.

The plea alleged that the wrestlers in the protest have completely misused the sexual harassment laws by making them a mockery of justice. If any player had undergone sexual harassment, they must have acted in accordance with the law through police and courts.

Plea seeks direction for registration of FIR against players including Vinesh Phogat, Bajrang Punia for allegedly abusing the process of law by putting the WFI Chief under extortion for making him resign.