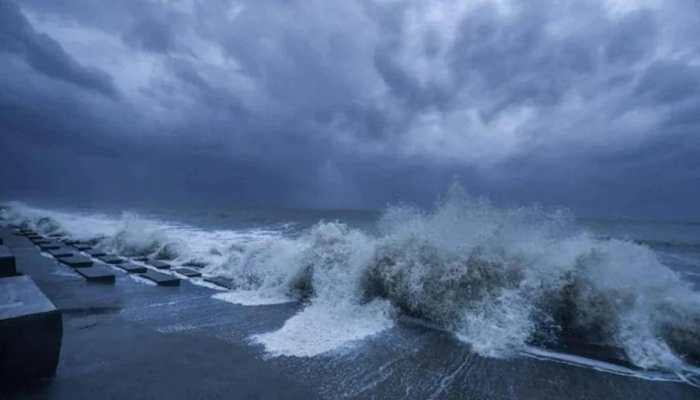 The remnant of the cyclonic storm “Sitrang,” which caused a deep depression over Bangladesh, has further weakened into a depression over northeast Bangladesh, north-northeast of Agartala, and south-southwest of Shillong, stated the India Meteorological Department (IMD) on Tuesday.

“Deep Depression over Bangladesh (Remnant of Cyclonic Storm “SITRANG”) further weakened into a Depression and lay centred at 0530 hrs IST of over northeast Bangladesh and neighbourhood about 90 km north-northeast of Agartala, and 100 km south-southwest of Shillong,” tweeted the IMD.

Earlier on Tuesday, Assam, Meghalaya, Mizoram, and Tripura were placed under a red alert for Monday’s heavy to very heavy and extremely high rainfall due to Cyclone Sitrang.

The India Meteorological Department (IMD) predicted widespread rainfall throughout Tripura for Monday and Tuesday, along with thunderstorms, lightning, and heavy to very severe to extremely heavy rain in a few isolated locations.

“Under Sitrang influence, widespread rainfall accompanied by thunderstorms/lightning/heavy to very heavy and extremely heavy rain at isolated places is very likely to occur over Tripura on October 24th and 25th, 2022,” IMD said in a press release.

The West Bengal administration was seen taking all necessary precautions, including the evacuation of residents and the provision of relief supplies to shelters, to prepare for potential destruction brought on by Cyclone “Sitrang.”

In South 24 Parganas, civil defence teams have been stationed at Bakkhali Sea Beach. The beach is off limits to visitors, and the stores are closed as well.

Mamata Banerjee, the chief minister of West Bengal, urged the people to “remain awake” on Monday since there is a high probability of rain on Tuesday as a result of cyclone Sitrang.

“There is a high chance of rain on October 25. There is an appeal to the people to avoid going out unnecessarily or to the sea areas including the Sundarbans. The state govt has made arrangements,” said CM Mamata Banerjee.

IMD reported that from 9:30 p.m. to 11:30 p.m. on Monday, the cyclonic storm “Sitrang,” which is pronounced “Si-Trang,” which was over the northwest and adjacent to the central Bay of Bengal and had a maximum sustained wind speed of 80-90 kmph gusting to 100 kmph, crossed the Bangladesh coast between Tinkona and Sandwip close to Barisal.

“It was centred at 11:30 pm on Sunday over coastal Bangladesh near latitude 23.70N and longitude 90.80E, about 40 km east of Dhaka, 50 km west-southwest of Agartala, and 120 km north-northeast of Barisal (Bangladesh),” IMD officials said.
“The cyclone is very likely to continue to move north-northeastwards and weaken into a depression during the next 6 hours and further into a well-marked low-pressure area during the subsequent 6 hours,” it further said.