Out In The Wild

‘It feels amazing when your film competes with Hollywood and wins’

Katrina reveals what keeps her busy ‘all day every day’ 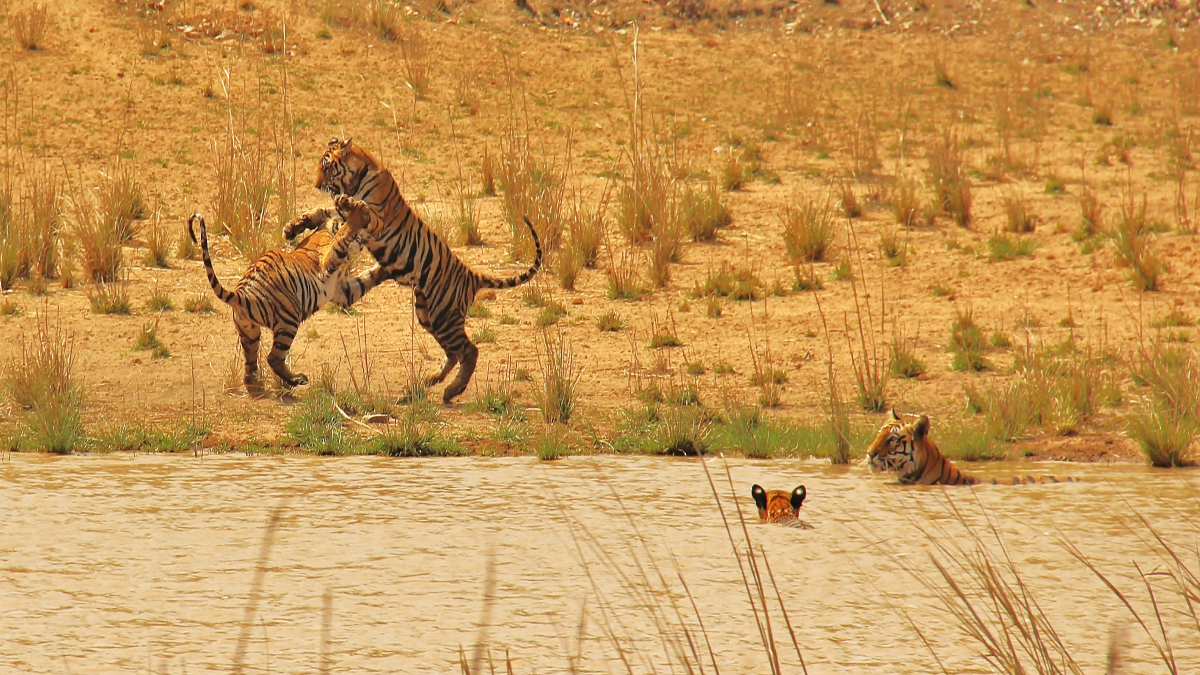 As a child, I had always been intrigued by how obsessed and passionate my father was about photography. He would spend hours and hours in the jungle in the scorching heat to capture that one perfect moment and sometimes to get nothing at all. I wanted to understand how just one photograph could have so much impact on a person, to experience and feel the same kind of emotions that my father did while making these beautiful photographs and that’s what led me to pick up the camera for the first time when I was 12-year-old and I haven’t been able to put it down since.

Despite all my efforts, my primary interest in photography has always been wildlife and animal photography and to narrow it down even further my favourite animal to capture in the wild is the tiger. There is just something about that animal which fascinates me. They have this certain majesty about them. When you look into their eyes you can’t help but be in awe. Just the sight of a tiger takes your breath away. The tigers have my undivided attention when they are in front of me, just observing them is such a delight.

I don’t think wildlife photography is something that you could just pick up one day and decide to do. One needs to have a genuine interest in wildlife and animals in general. You need to learn and familiarise yourself with their behaviour. Knowledge of your subject will help understand their activity. I think that is what draws me to wildlife photography, for me behaviour is always satisfying to capture, and this requires patience to wait for the subject to do something. It may be as subtle as the subject merely looking at you or as dramatic as a tiger charging at you.

Patience is another important factor, it leads to opportunity, and the unpredictability of behaviour leads to a burst of shots, hoping that one of them captures the right moment. More than anything, however, since wildlife can be very unpredictable a tremendous amount of luck is involved too. One needs to be in the right place at the right time.

I think the other thing that fascinates me about wildlife photography is the lighting. It is one of the most important aspects of any kind of photography and while in some kinds of photography you can manipulate it when you out there in the wild you are completely dependent on the natural light. Often to make the desired photographs you have to adjust your angle depending on how you think the animal is going to behave and move, again knowledge is key.

Lastly, I would just like to share two of my absolute favourite experiences that I had in Bandhavgarh National Park. The first one was in the summer of 2013, we had a drive in the Tala zone of the national park and it was my last drive of the trip. We hadn’t had any luck that day. We decided to leave as it was completely quiet and there was no sign of any movement anywhere. Just as we were leaving my father said to me, “Sorry, no tiger sighting on your last drive”, and just as he said that a big male tiger Bamera, the then king of Bandhavgarh, jumped out of nowhere and walked past us in the open grasslands. The sighting lasted about 5 minutes as we also had to get out of the park because of the time restrictions but those five minutes were probably the most exciting five minutes which I haven’t been able to forget till date.

The second incident was in the summer of 2015 and we had a drive in the Magadhi zone of the national park. We knew that a family of tigers — the mother (also known as the Pattiya female) and her three cubs — was somewhere close by behind the bushes and they would come soon enough to the water body to cool off as the heat decreases. We had all taken our positions according to the best angles around the water body and had been waiting for about three hours in the sun with no shade anywhere. I remember getting irritated because of the heat and suddenly there was some moment in the bushes and slowly one by one all four of them came out and started cooling off in the water. The cubs were around 6 months old, still very young, they were playing with each other, fighting and just having a good time. I remember as soon as I saw them the heat didn’t matter anymore. The sighting lasted for about an hour and suddenly we saw the mother get out of the water and leave and sit in the shade, a little further away and the cubs followed too.

First, we didn’t understand as to what had happened and then we saw from the other side a forest guard was walking and coming towards us, the tigress was scared of the man on foot but she was comfortable with us being in our jeeps and that day I learned that that is true for all the tigers. They are scared of human on foot. Everyone quickly asked the forest guard to sit in any of the jeeps so that the tigers could come back in the water again and he did.

After about 10 minutes when there was no movement at our end, we saw one of the cubs get up and go to his mother and in a way nudge her to let them go back to the water, but the mother had been watching the forest guard and knew exactly which jeep he was in and she didn’t feel comfortable with him; She got up and went further into the jungle and the cubs had to follow. For me this whole experience was just phenomenal, their behaviour seemed so similar to us humans. The children always do what the mother wants them to do and the mother is always looking out for her children. Even the part where the cub nudged his mother in a way trying to convince her to let them play in the water. With wildlife you never know what you are going to experience that particular day, you can never say what will happen for sure. And I guess that’s what is so exciting about wildlife photography, just the thrill of it all. Sometimes these encounters can be so impactful and can teach you so much as well.

Five great resources for easy and wholesome recipes during lockdown