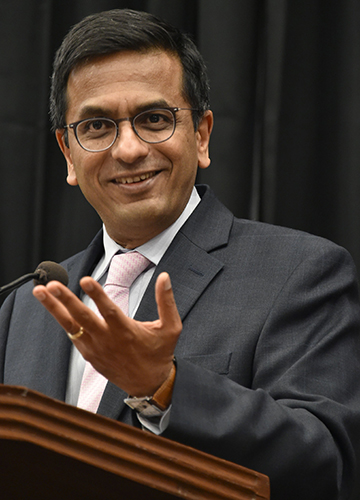 Chief Justice of India DY Chandrachud spoke on Saturday on the occasion of Constitution Day while quoting Jawaharlal Nehru.

“The past clings on to us still in some measure and we have to do much before we redeem the pledges we have so often taken,” said the Chief Justice, quoting India’s first prime minister as he recalled his “Tryst with Destiny” speech delivered on the night of the country’s Independence.

At the Supreme Court, where a special event was taking place, Chief Justice Chandrachud made the remarks in front of Prime Minister Narendra Modi and Union Law Minister Kiren Rijiju, among others.

“Marginalised community were first to lay the foundation of the Constitution,” the Chief Justice said during the event, referring to their struggle as he spoke about the pre-Independence era and post-independence times. The Chief Justice also recalled Martin Luther King, Jr’s quote that “the arc of the moral universe is long, but it bends toward justice”.

“The representation of marginalised communities and women must be enhanced in the legal profession,” Chief Justice Chandrachud stressed while he also urged high courts “not to diamantle virtual courts facilities but rather strengthen this model”. “Courts need to remodel themselves to reach out to people instead of people reaching out,” he underlined and also stressed on the “need for the judges to introspect and shed all prejudices against varied life experiences to be able to uphold equality, liberty and fraternity”.

On November 26 each year, Constitution Day, often referred to as “Samvidhan Divas,” is observed to remember when the Constitution was ratified.

“In a country as large as ours, the delivery of justice remains a challenge. From courts to citizens, quick access to justice should be the focus,” the minister further asserted as he also insisted on use of local languages in courts. He said that the Bar Council of India has set up a committee under the chairmanship of former Chief Justice of India SA Bobde to examine the feasibility of having a “common court vocabulary” and push regional languages in courts.