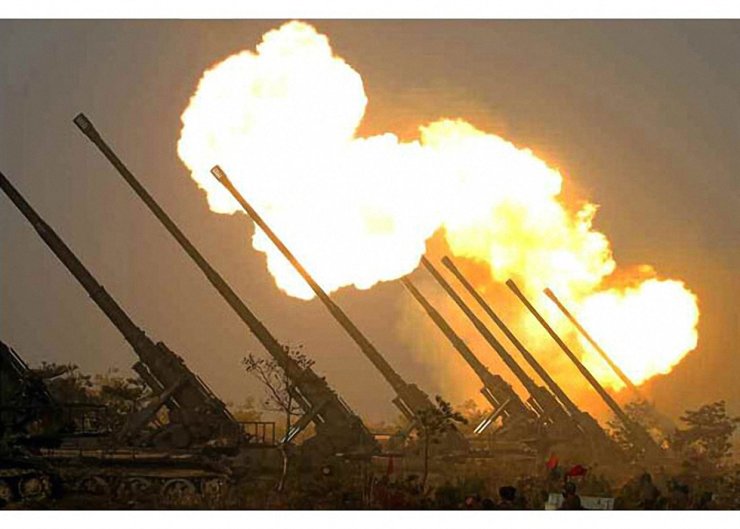 North Korea fired over 130 artillery rounds on Monday, which fell into the sea off its east and west coast, Yonhap news agency reported citing the Joint Chiefs of Staff. The shells landed close to the de facto maritime border, which Seoul claimed was a breach of a 2018 bilateral military agreement.

The artillery fire was reportedly heard from Jangsan Cape in South Hwanghae Province and Kumgang County in Kangwon Province beginning at 2:59 p.m., according to the Joint Chiefs of Staff (JCS). The shells landed in the maritime buffer zones established by an inter-Korean military agreement.

“The artillery firings into the eastern and western maritime buffer zones are a clear violation of the September 19 military accord and we strongly urge the North to immediately halt them,” the JCS said, according to Yonhap news agency. It added the South Korean military is tracking and monitoring related North Korean movements in cooperation with the United States and is strengthening a readiness posture in preparation for a potential contingency.

Later in the day, the North Korean military acknowledged that it had retaliated against South Korea’s live-fire drills by firing artillery shells. “An emergency order was issued to troops at the frontier to monitor the enemies’ motions and prepare for rapid counterattacks. In addition, the troops at the eastern and western frontiers were ordered to counter-fire some 130 marine artillery shells,” Yonhap news agency stated, quoting the spokesperson of the General Staff of the Korean People’s Army as saying.

Earlier in November, North Korea fired an intercontinental ballistic missile (ICBM) toward the East Sea on Friday, the South Korean military said, in protest over the United States’ move to reinforce its “extended deterrence” protection of South Korea and Japan.

This statement was released on the day when South Korea and the United States simulated strike operations against military sites linked to North Korea’s missile program.

“Kim Jong Un solemnly declared that if the enemies continue to pose threats … our party and government will resolutely react to nukes with nuclear weapons and to total confrontation with all-out confrontation,” the official KCNA news agency said.

The launch is presumed to have involved the Hwasong-17 ICBM, according to Yonhap, the same ICBM was test-fired on November 3, but the launch was seen as a failure.