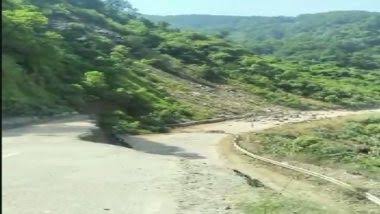 The State Emergency Operation Center in Sirmour, Himachal Pradesh, reported that a landslide near the Hevna temple has disrupted vehicular traffic on National Highway 707.

After seven hours, the road has finally been repaired, and commuter traffic has resumed. The 151-kilometer-long NH 707 connects Paonta Sahib in Uttarakhand with Hatkoti in Himachal.

Earlier on September 6, a landslide that happened during ongoing work forced the closure of the Chandigarh-Manali highway (NH-3) near Pandoh for vehicular traffic. Large boulders caused damage to an excavator.

After the state saw significant rainfall on Friday, the India Meteorological Department in Shimla issued a heavy rain forecast for Himachal Pradesh for the next 48 hours.

In several areas of the state, these torrential rains have caused landslides, blockages, and flash floods, among other disasters.

“Almost all places in the state have received rainfall. Kangra, Mandi, Bilaspur, Kullu, Sirmaur, and Solan districts have received rainfall during the past 24 hours (on Thursday). The rain will increase from tomorrow (Friday) afternoon in the state. The monsoon will be active for two to three days. The monsoon will continue, and we are expecting the withdrawal of the monsoon by the end of September. The higher reaches of Lahaul-Spiti and Kinnaur have also increased. The temperature has also dropped in the region. The alert has been issued for the 24th and 25th of September in the districts of Shimla, Mandi, Kangra, and Sirmaur,” said the IMD forecast dated September 23.