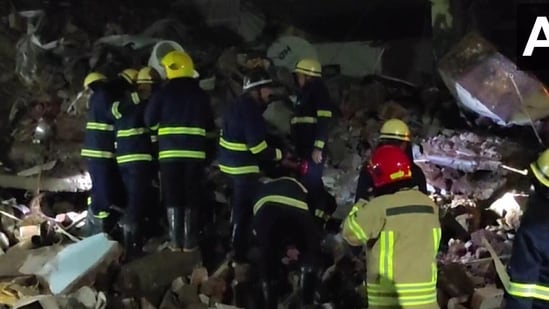 Rescue efforts are in progress following last night’s collapse of a four-story building in Navi Mumbai. In the Kopar Khairane neighbourhood of Navi Mumbai’s Bonkode village, the tragedy happened on Saturday at 10.30 p.m.

A fire official said that an unidentified body has been recovered from the site of the incident and efforts are underway to ascertain the identity of the deceased. Over 30 people have been evacuated from the building.

“About 32 people staying there had come out before the collapse. The remaining 8 people were coming out of the building when it collapsed. They were evacuated immediately. Our team is engaged in the rescue work, investigating underway,” Purushottam Jadhav said.

“A body was found this morning but it has not been identified so far. We have called the people of the building to identify it,” he added.

He said that an investigation into the incident is underway.