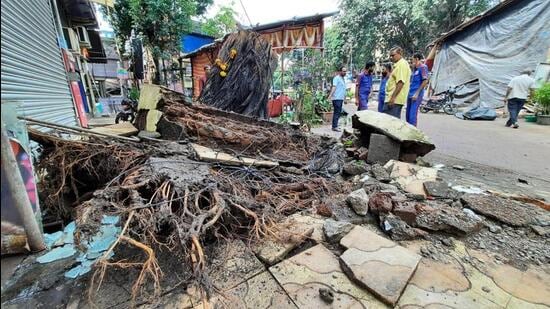 A tree fell on a Ganesh pandal in Thane on Friday night, killing a 55-year-old woman and injuring four others, according to officials.

A 30-year-old man is among the injured, and his condition is critical; he is receiving treatment in a private hospital, officials added.

This is the third rain-related fatality to occur in Thane in the past few days. On Friday night, the city was pummelling by heavy rains for the second straight day, along with thunderstorms and lightning. Due to flooding in the city on Thursday, two people perished in the water.

The deceased Pratik Walavalkar, 30, and the deceased Rajashree Walavalkar had travelled to the pandal. Two vehicles and a portion of Kolbad Mitra Mandal’s pandal were damaged when the tree crashed on them.

“The incident took place around 8 in the evening when due to the storm a huge tree came crashing down on the pandal. A few people had taken shelter inside to escape the heavy rain. Rajashree suffered hip injuries, while Pratik suffered hip and eye injuries; Rajashree died during treatment,” said Avinash Sawant, chief officer of Thane’s Regional Disaster Management Cell (RDMC).

RDMC and pandal volunteers used a JCB and a Hydra machine to cut down the tree. The immersion was carried out after the tree was cut down, and the idol sustained no damage.

In Thane, flooding on Thursday resulted in the deaths of a 4-year-old boy and a 35-year-old man.