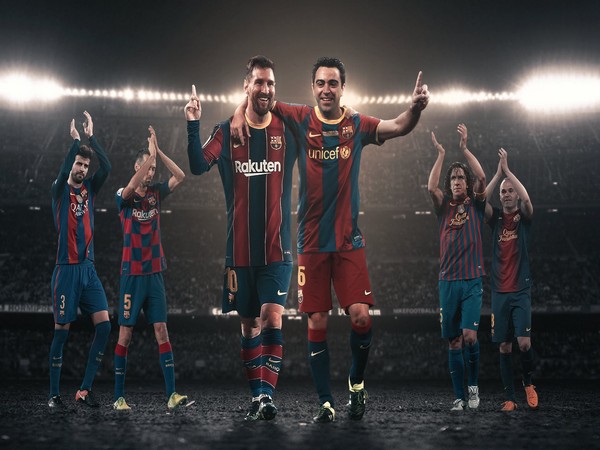 Barcelona [Spain], March 16 (ANI): Barcelona’s Lionel Messi on Tuesday achieved yet another milestone as he equalled former player Xavi’s club record of 767 appearances in a Barca shirt.
Messi touched the figure when he stepped out to play the La Liga game against Huesca. The Argentine made the moment more special as he netted twice in the match, powering Barcelona to a 4-1 win.
On 5 January 2011, Xavi had made his 550th appearance in a Barca shirt, taking Migueli’s (549) record before setting a new high of 767 matches. Sooner or later, however, that record would be Messi’s.
The 767 games played so far by Messi are divided into a total of six different competitions. La Liga is the competition with the most matches, with Messi playing a total of 510 in the Spanish top flight. As for the Champions League, he has played 149 games, while 79 have come in in the Copa del Rey, 20 in the Spanish Super Cup, five in the Club World Cup, and four in the European Super Cup.
Xavi had set his record five-and-a-half years ago, in the last of his 17 seasons with the club. Along the way, he won 27 trophies with FC Barcelona, in a club career that began on August 18, 1998.
During the match against Huesca, Messi scored the opening goal in the 13th minute, before Antoine Griezmann doubled the lead in the 35th minute. Huesca managed to pull one back with the help of Rafa Mir’s strike.
However, Oscar Mingueza’s goal in the 53rd minute restored Barcelona’s two-goal lead. Messi then netted a goal in the 90th minute, sealing the final scoreline of 4-1.
Barcelona will next play against Real Sociedad on March 22. (ANI)