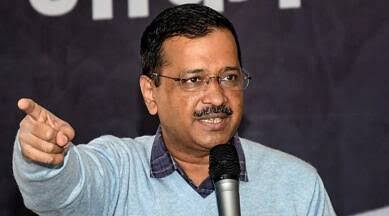 Arvind Kejriwal, the chief minister of Delhi, urged voters on Wednesday to support the Aam Aadmi Party (AAP) in the upcoming elections for the municipal corporation, stating that the Bharatiya Janata Party (BJP) had done nothing to clean the Capital during its 15 years in the civic body.

The BJP, which has controlled the MCD for the past 15 years, is vying for a fourth consecutive term in the civic body, while the AAP, which has governed Delhi since 2015, is attempting to usurp the BJP’s authority over the corporation. On the evening of December 2, the campaigning for the elections will come to a conclusion.

Speaking during an election campaign in north Delhi’s Malka Ganj area, Kejriwal said his government could not clean the city because sanitation services do not come under the state.

“It pains my heart to see Delhi engulfed by garbage. Despite being the CM, I have no power to clean garbage because the MCD is under the BJP. Delhi residents gave us the responsibility of schools, hospitals, electricity, water. We fixed everything and provided free healthcare and electricity to everyone. The people gave the BJP one job — they had to look after the garbage — but even after 15 years, they could not clean Delhi,” the CM said.

“MCD employees will get paid on time, the garbage mountains will be removed, and RWAs will get the status of mini councillors and will get funds to empower them for self-governance,” he said.

Reacting to Kejriwal’s promise of a mini councillor status to RWAs, BJP spokesperson Sambit Patra said, “They are trying to mislead the RWAs by promising mini councillor status. Delhi chief minister Arvind Kejriwal had promised that liquor vends will be closed if mohalla sabhas don’t approve it. But what we see is just the opposite. Today, Kejriwal has to answer which mohalla sabha approved the excise policy.”

Kejriwal also stated that voting the AAP to the MCD will ensure that there is better synchronisation with the state government.

“The Delhi government is ours and the AAP is going to come to the MCD as well… Together, my MLAs and my councillors will do all your work, but if their councillor wins in your ward, he will make your life hell for five years. That’s why I warn you to not choose the councillor of another party by mistake,” he said.

Kejriwal said, “The central government refuses to pay Delhi its rightful share of funds. We practically get nothing from the Centre all year. Despite that, we did a lot of work… We built schools, mohalla clinics, hospitals, transformed the whole system… We did not cry for funds like them.”