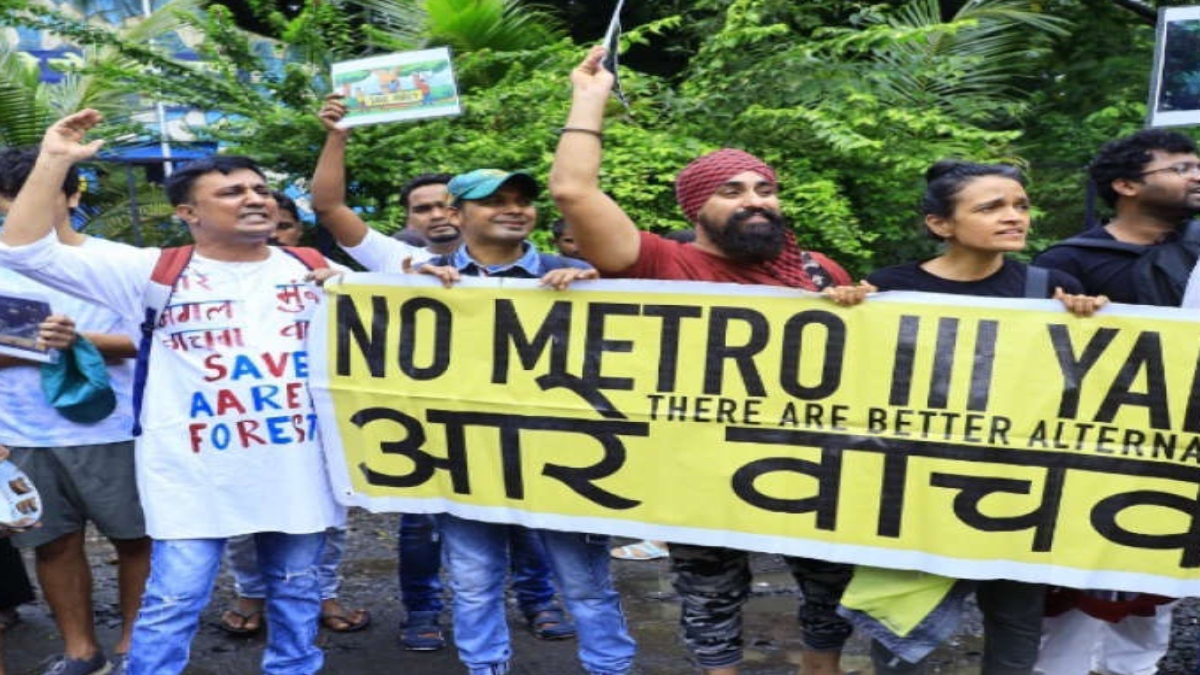 People in Mumbai on Sunday took to the streets in protest against the Eknath Shinde government’s decision to resume construction of metro car sheds in the Aarey colony forest, claiming the project was being developed at the expense of the forest area. The Aarey forest is a 1,800 acre area, which is often termed the city’s “green lung”.

Soon after Eknath Shinde was sworn in as the new Maharashtra Chief Minister and BJP leader Devendra Fadnavis as the Deputy Chief Minister, the state government directed the Advocate General that the metro car shed be built in Mumbai’s Aarey colony itself.

Shiv Sena leader Aaditya Thakeray also participated in the protest on Sunday, saying that this is a fight for Mumbai and its forest life. “Under our government, we had declared 808 acres of land as forests. We fought for forests to protect our tribals. When we were here, no trees were uprooted,” he said.

Claiming that metro cars go for maintenance every three-four months and not every night, the government can afford to build sheds in Kanjurmarg. “If sheds are built in Kanjurmarg, forest life will be preserved, along with tribal life and money,” he said.

He further said, “Whatever anger they (Maharashtra government) have against us should not be taken out on the city. Jungles and the environment need to be protected with climate change upon us. We had proposed the construction to be turned into a veterinary hospital for the jungle.”

Earlier on 3 July, Aaditya Thackeray had urged the newly inducted Eknath Shinde government to scrap the re-proposed Aarey metro project, which has been a fraught issue in the city for several years.

In September 2019, then Maharashtra Chief Minister Devendra Fadnavis had said the government is bound to cut trees in Mumbai’s Aarey forest area as “development is important”.

The Mumbai Metro Rail Corporation Limited (MMRCL) announced its plan to cut down over 2,700 trees from the Aarey colony in order to build a car shed for the metro. The colony, spread over 13,000 hectares, is home to over 27 Adivasi villages and inhabits various animal species.

The Bombay High Court in September 2019, verbally directed the MMRCL and the state government not to cut any trees in the Aarey forest area for the construction of a metro car shed, to which they agreed.

Later in October 2019, the Bombay High Court had dismissed all petitions against the proposed cutting down of over 2,500 trees in Aarey Colony of Mumbai to make way for a metro car shed.

However, the Maharashtra government stayed the order for the Aarey metro car shed project following massive public agitation in the city.

Heavy downpour across states push life out of order