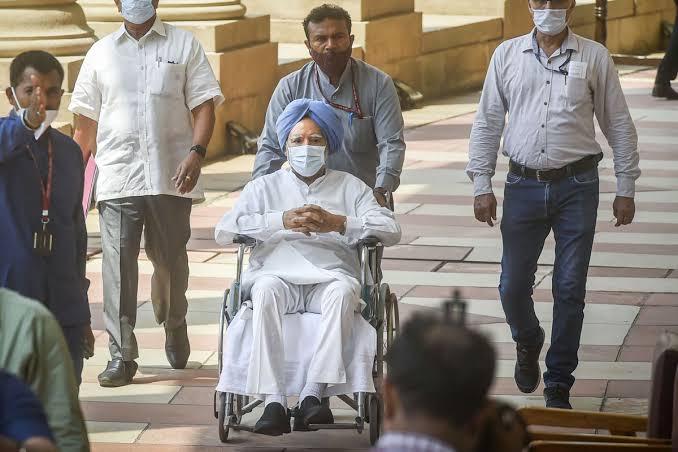 Draupadi Murmu, former Jharkhand Governor, was nominated by NDA against Yashwant Sinha for the Presidential elections.

Manmohan Singh was seen in a wheelchair assisted by four officials. Visuals of him casting his vote started scoring tweets by his supporters and congress members.

ManMohan Singh and Prime Minister Modi were the ones seen voting in the first hous.

Manmohan Singh is bestowed with love and support by the Congress leaders. ” Sardar Manmohan Singh, who reached parliament to fulfil his democratic responsibility despite his poor health, is an inspiration for all of us. God bless him with good health and a long life,” tweeted Srinivas, the head of the youth congress.

Meanwhile, Akali MLA has declared that he will boycott the elections. He said, “Listening to the sentiments of the Sikh community, the issues of Punjab, and the voice of my conscience, I am not voting for the candidate of any party in the presidential election today.”

MLA Manpreet Singh Ayalli announced in a video published on Facebook his decision to boycott the elections.

He refused to vote for Congress candidate Yashwant Sinha, accusing them of being “responsible for the 1984 Sikh genocide.”

For the NDA candidate, Draupadi Murmu, he expressed resentment for not considering the Sikh community before nomination. He said, ” Droupadi Murmu comes from a tribal community and I have no issues with her. But even BJP, despite being in the Centre, has not been able to resolve the issues of Punjab, including the release of Sikh prisoners, Punjab’s rights over Chandigarh and the issue of Satluj Yamuna Link Canal.”

The poling will be conducted today starting from 10 AM to 5 PM in the Parliament and State legislative assembly.

Harbhajan Singh, Misa Bharti and Rajeev Shukla among 28 MPs to sworn in as Rajya sabha members