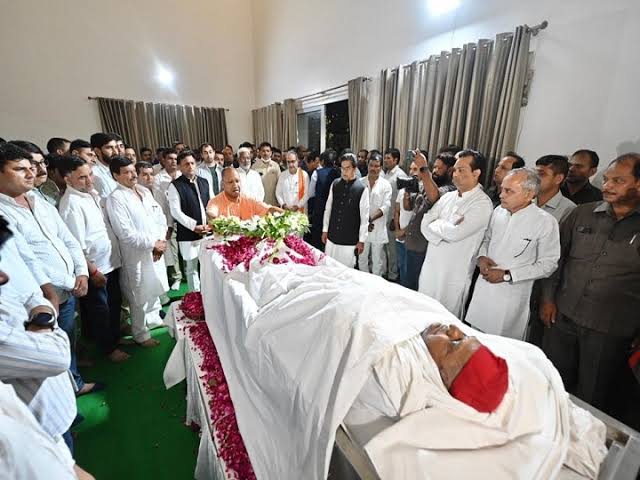 Mulayam Singh Yadav, the founder of the Samajwadi Party and a former chief minister of Uttar Pradesh, will be laid to rest on Tuesday at his ancestral home in the Etawah district town of Saifai.

At Gurugram’s Medanta Hospital, Mulayam Singh passed away on Monday morning at the age of 82 from ailments associated with ageing. Following a decline in his health, he was brought to the hospital’s intensive care unit (ICU) last Sunday. Akhilesh and Prateek, his two sons, are still living. The burial was anticipated to be attended by a number of chief ministers and Om Birla, Speaker of the Lok Sabha.

According to sources, the chief minister of Rajasthan, Ashok Gehlot, and his counterpart from Chhattisgarh, Bhupesh Baghel, will represent the Congress at the veteran of the Samajwadi Party’s cremation.

Mallikarjun Kharge, a veteran leader in the Congress, will attend the burial on Tuesday as well. Kharge won’t take over as the party’s official leader because he is running for party president.

It is unclear at this time whether Priyanka Gandhi and Rahul Gandhi, who are in Karnataka for the Bharat Jodo Yatra, would be present.

After the death of the seasoned Samajwadi Party politician and former chief minister of Uttar Pradesh, tributes began to come in.

“The death of Shri Mulayam Singh Yadav is an irreparable loss to the country. The achievements of Mulayam Singh Yadav ji, who came from an ordinary background, were extraordinary. ‘Dharti Putra’ Mulayam ji was a down-to-earth veteran leader. He was respected by people of all parties. My deepest condolences to his family members and supporters! “The Rashtrapati Bhavan tweeted.