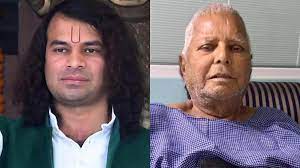 A case has come to light where Rashtriya Janata Dal President and former Railway Minister Lalu Prasad Yadav stopped reciting and listening to Gita in AIIMS, Delhi. After this, a strong reaction comes from Lalu’s son Tej Pratap Yadav.

Taking to Twitter, Lalu’s son Tej Pratap Yadav tweeted and alleged that “Dad was stopped from reciting and listening to Shrimad Bhagwat Gita in the hospital, while father loves to read and listen to Gita. So that person who stops him from reading the Gita does not know that he will have to pay the price of this great sin.”

Moreover, even before this, Tej Pratap Yadav had made an emotional tweet about his father. Earlier, Tej Pratap tweeted “Dad get well soon and come home; if you are here, then everything is here. Lord, I am in your shelter till the dad does not come home. All I want is my father and nothing, neither politics nor anything else, just my father.”

Meanwhile, Lalu’s elder daughter Misa Bharti had earlier told that Lalu’s creatinine was increased., but now his condition is already stable, and the doctors are constantly monitoring him.

Notably, on Sunday, July 3, Lalu fell from the stairs at his official residence in Patna, where he suffered a fracture in his right shoulder and a back injury. Due to their deteriorating condition, he was admitted to Delhi AIIMS, where his health improved, but the kidney problem persisted.

Two terrorists﻿ who attacked the army post in Parghal are killed in retaliatory fire.

Four Indian Army soldiers, including a Junior Commissioned Officer (JCO), were killed and one other injured, when two fidayeen tried to enter an army post in Parghal area of Darhal in Rajouri district. The terrorists attacked the post in early hours of the day. However, alert soldiers neutralised the two suicide attackers in retaliatory fire.

“In the early hours of 11 Aug 2022, alert sentries of the Indian Army post at Parghal, District Rajouri, Jammu and Kashmir detected some suspicious persons approaching their post taking advantage of the inclement weather and dense foliage. The sentries challenged the two terrorists who threw grenades while attempting to gain entry inside the post.

However alert troops cordoned the area and engaged them in a firefight thereby pinning them. In the ensuing encounter, two terrorists were neutralised,” Army PRO Lt Col Devender Anand informed the reporters here.

Out of six soldiers who were injured while repulsing the suicide attack by terrorists four succumbed to their injuries.

The soldiers killed in the attack are Subedar Rajendra Prasad of Maligoven village in Jhunjhunu and Riflemen Lakshmanan D of T Pudupatti village in Madurai, Manoj Kumar of Shahjahanpur village in Faridabad and Nishant Malik of Adarsh Nagar in Hisar.

Special Operation Groups of the police were immediately sent to cordon off the area. The police and army were already on high alert after intelligence inputs regarding the movement of two suspects in Darhal area. Mukesh Singh, Additional Director General of Police, Jammu, said, “As reported by 11 Raj Rifles, someone tried to cross the fence of the army camp at Parghal. Sentry challenged and an exchange of fire took place. Additional parties dispatched for the location which is around 6 km from police station Darhal.”

According to sources, the two terrorists came from South Kashmir and were camping in Darhal for the past few days. CCTV cameras installed in shops of the Darhal market captured the movements of these terrorists carrying guns.

Sources said that the terrorists were armed with AK series rifles, grenades and other arms and ammunitions, which could hold them longer against a retaliatory fire by security forces.

They were also carrying thousands of rupees in Indian currency. Wire cutter to cut fence to sneak into the army operational base and knives for close attack on army jawans were also recovered from the terrorists killed in the operation.

Notably, the attack comes a day after three LeT terrorists were neutralised by security forces in Budgam. One of the killed terrorists was involved in the killing of civilians Rahul Bhat and Amreen Bhat.