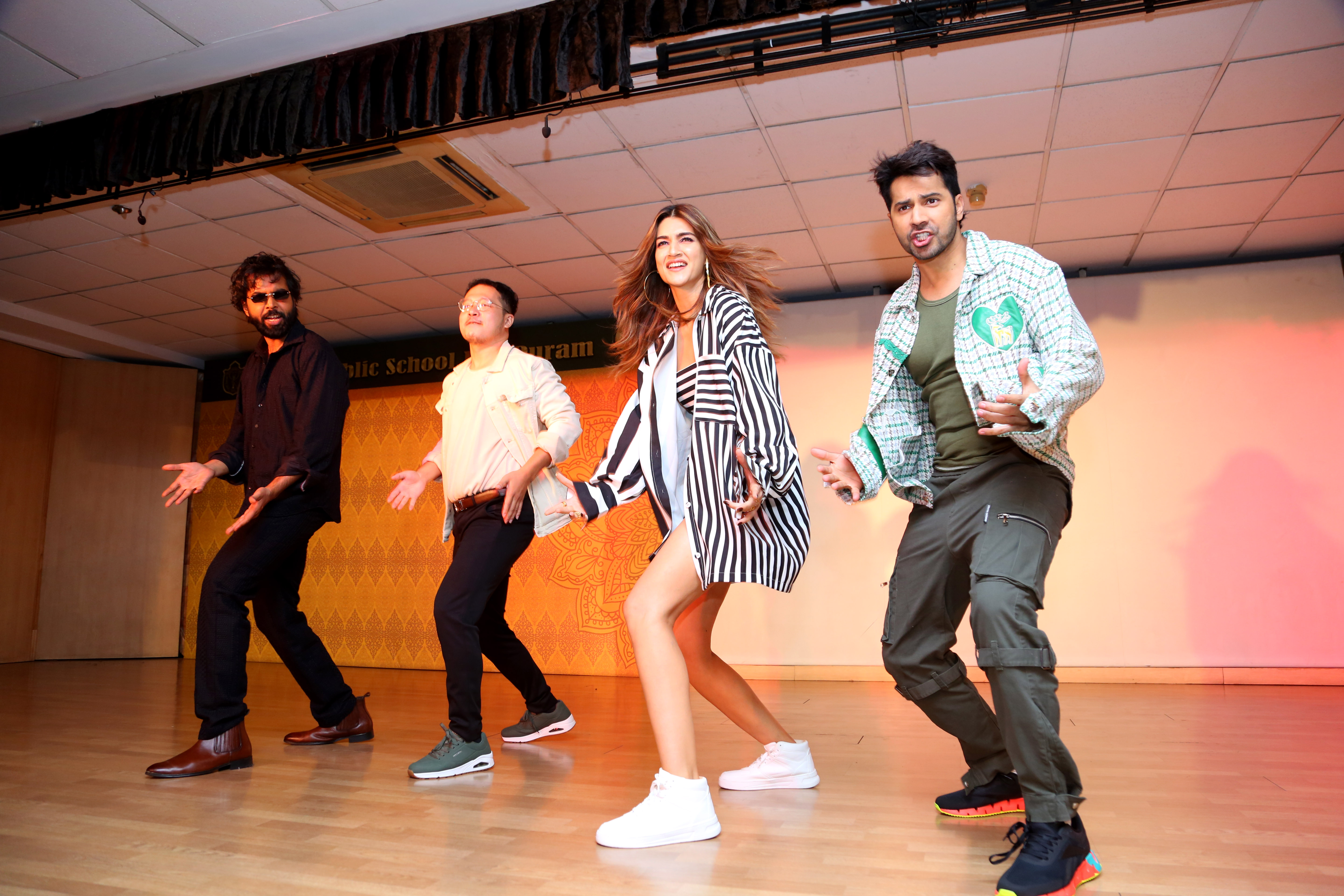 DPS RK Puram hosted the starcast of India’s first creature comedy Bhediya to celebrate the success of their alumna Kriti Sanon. The guests included Varun Dhawan, DPS RK Puram alumni Kriti Sanon (Batch of ‘07), Abhishek Banerjee, and debutant Paalin Kabak. A screening of the trailer was followed by an interactive session of the entire star cast with the students.
The promotional session started with a screening of the trailer which evoked an enthusiastic response from the audience. This was followed by an interactive session with the students of classes XI and XII where the film-promotion team wished them luck for the remaining school year. The song Apna Bana Le introduced the lead actors Varun Dhawan and Kriti Sanon followed by songs Jungle Mein Kaand and Baaki Sab Theek. The team invited students on stage to learn and perform the hook steps of the signature song of the movie.
Kriti Sanon was the epitome of grace, class, and beauty as she addressed her juniors warmly. She revived memories of her time in school and said that she was lucky to be present in school during the Golden Jubilee Year of DPS RK Puram. She reminisced about the Aloo Patties and chowmein that were a staple during her time in school. She also said that DPS RK Puram gave her the confidence to follow her dreams and made her what she is today. She highlighted the importance of finding one’s passion in life.
Varun Dhawan expressed his happiness to be in DPS RK Puram. He said that he thoroughly enjoyed spending time on campus, and listening to anecdotes of Kriti’s excellence in academics and co-curricular achievements.
Abhishek Banerjee said that as a student he always looked up to DPS RK Puram as a wonderful institution, and was excited to be here in person. He also said that he had fun shooting the movie with his co-stars and crew, comparing it to a college trip.
Paalin Kabak came on stage and gave a soulful rendition of a beautiful love song, and regaled the audience with comedic imitations of Kumar Sanu.
Kriti Sanon and Varun Dhawan gave a sensational performance on Thumkeshwari and were joined by the rest of the cast members for a performance on Jungle Mein Kaand from the movie.
Varun Dhawan followed up the entertaining session with an insight into their upcoming film Bhediya and addressed the conflict between animal and man, and underlined that the earth belongs to both. He added that this was a very special film geared towards spreading awareness amongst the younger cinephiles. He hoped that Bhediya would match the appeal of Hollywood Blockbusters.
Kriti Sanon said that the movie was one of her personal favorites and she feels very connected with it. She talked about the VFX that were supplied by MPC Film who also gave the effects for Jungle Book, Planet of the Apes, and Lion King among others.
The Principal Ms Padma Srinivasan joined the students in celebrating the success of Kriti Sanon, and hoped that she will be able to do the same for the present batch. She praised the journey of Kriti Sanon from her student life to superstardom.