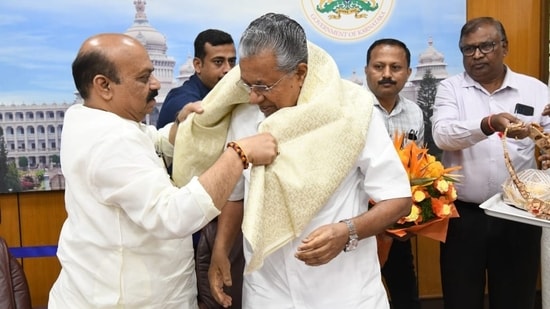 Kerala Chief Minister Pinarayi Vijayan met with Karnataka Chief Minister Basavaraj Bommai on Sunday in Bengaluru. The meeting was called to discuss the possibility of extending the Silver Line railway project to Karnataka.

The Kerala government has suggested to the southern zone council in Kovalam that the semi-high-speed rail be extended to Mangaluru in Karnataka, and it has already submitted a detailed report to the Karnataka government. The Karnataka government’s decision will be critical in obtaining central government approval for this project. This crucial meeting was also scheduled to discuss the development of the Nilambur-Nanjangud railway stretch and the Thalassery-Mysore highway connecting the two states.

However, the project sparked massive protests in Kerala due to environmental concerns.

According to the reports, Vijayan and Bommai also discussed issues of mutual interest between the two bordering states. Basavaraj Bommai also congratulated his counterpart, Chief Minister Pinarayi Vijayan. Following the meeting, Pinarayi Vijayan will attend a CPM event in the Karnataka town of Bagepally, which is about 100 kilometres from the state capital.