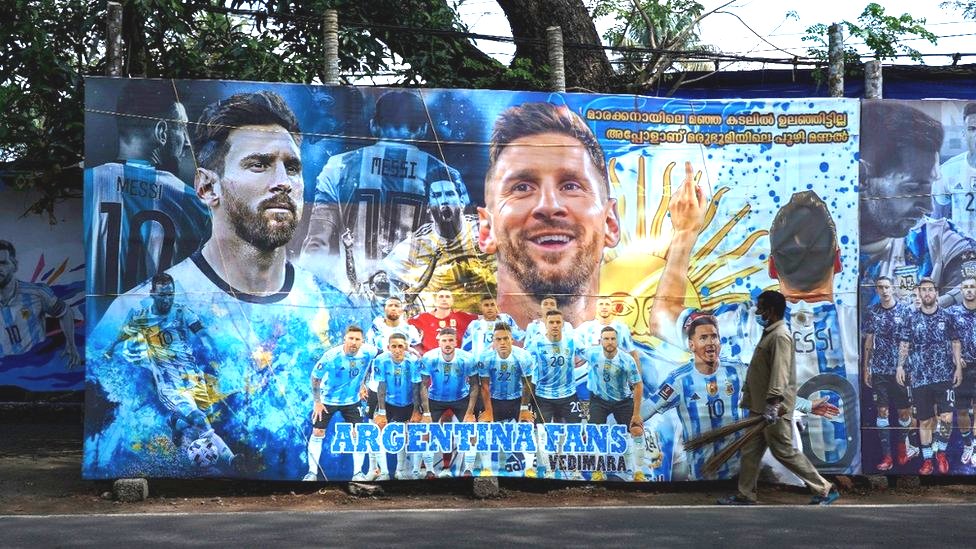 After the Netherlands and Argentina qualified for the quarterfinals in the FIFA World Cup in Qatar, it reverberated across Kerala in small towns and large cities as people throughout the state cutting across socio, economic, religious and political differences are gripped by football fever.

Huge cut-outs of international footballers Lionel Messi, Cristiano Ronaldo and Neymar Jr are erected in every nook and corner of North Kerala including even small towns in Malappuram, Palakkad, Kozhikode, Kannur, Kasargod and Wayanad districts. In Central and South Kerala, huge cut-outs of the players are erected but not much as compared to northern part of the state.

Even after certain Islamic scholars, both the Sunni and Mujahid groups, spoke against the frenzy of Muslim youths for the game and supporting foreign nations and foreign players, the latter did not give a hoot.

Sulaiman Khader (27) from Tirur in Malappuram district told IANS: “Football is a sport that unites people, and in Kerala, we unite for a team, support the team and pray for the victory of that team and it’s a healthy exercise. The religious scholars need not interfere in this.

“We are all highly religious but in football, there is no role for the scholars to dictate terms to us. You can see hundreds of youths from all communities cutting across religious, social and political lines unite for their favourite team.”

Khader said that he was a hardcore fan of Brazil and that he expects the team to win the cup at Qatar.

As the FIFA World Cup is being held in Qatar, it has helped many fans from from Malappuram, Kozhikode, Kannur, Kasargode, and Wayanad districts to reach Doha because the distance from Calicut airport to Doha is less comapred to other places in the state.

Youth Congress state president Shafi Parambil, an MLA and an ardent Argentina fan was in Qatar to watch the matches of his favourite team even as rival group in the Congress sent missives to New Delhi in his absence from the state. Shafi is back in Kerala and is likely to visit Qatar again to watch matches.

CPI leader and former MP from Thiruvananthapuram Lok Sabha constituency, Panniyan Raveendran, a hardcore fan of Brazil, is expecting the team to win the cup. He is a footballer and a football commentator as well who hails from football frenzy Kannur district of Kerala.

Women are also actively involved in watching football matches and accompanying their husbands, brothers, and children to watch the matches being shown live on big screens across the state.

Till midnight, children and women are watching the game at Thiruvananthapuram, Kottayam, Ernakulam, Kollam, and almost all districts of the state.

A senior officer said: “While police as usual is keeping an eye on these big screens and the crowd watching the match, there has not been a single instance of any criminal activity during the matches and with the roads full of people even at late night hours, its sort of a festival atmosphere across the state.”

In Thalassery, Kannur district, people are placing bets among them and are not generally involving money, instead food is being offered. The bets are being placed on winning team, victory margin, goal scorers, penalty saved, goals saved, and like that.

Sujith Chandran, a sports shop owner in Kannur told IANS: “Heavy sales of sports gadgets have taken place even during the build-up of the tournament and when the FIFA World Cup kicked-off, there was no limit to sales. T-Shirts, shorts, footballs and goalposts sale is high and jerseys of Argentina, Brazil, and Portugal are much in demand.”

There has been a huge sale of Television sets during the World Cup and most of the major electronic shops have announced offers and subsidies on it. Footballs are given as a gift when a family purchases a Television set and everyone is going for large screens.

Mathew Augustine, owner of a major electronic shop in Kottayam said, “Generally, if 20 television sets are sold per day, now, it has touched hundred a day and it’s a five fold increase. People are replacing their TV sets with new ones and cost is not an issue for them. In most cases, children are putting pressure on parents to buy new models and it’s brisk business for people like me.”

With the football fever touching its peak in Kerala, there is a huge booking in airlines for Qatar from Quarterfinals onwards and the high fares is not a deterrent for die-hard fans who want to see their favourite heroes in action.