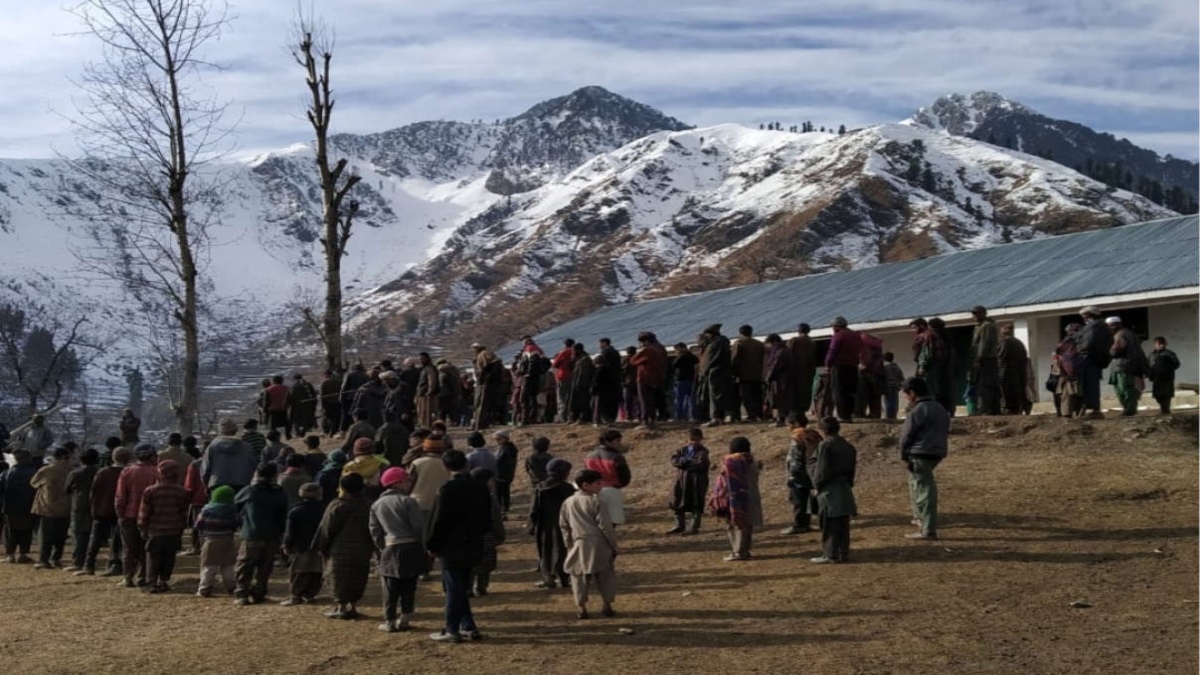 Indian Army units deployed in Nihal area of Reasi district reached out to the populace, to sensitise them against Covid-19 pandemic. The population of this area is poor and lacks basic amenities.

Spread of the Covid-19 pandemic has further added to their hardships. In order to enable the locals to fight the pandemic, there was a requirement to distribute Covid kits to 500 Gujjar and Bakkarwal families in Nihal area of Reasi district under the flagship of Sadhbhavana projects.

Villages in the area of responsibility are remote far flung and lack basic medical infrastructure which impacts availability of hygiene and chemicals and other items necessary to sanitise the area and prevent spread of the Covid-19 pandemic. To tide over this issue and to ensure availability of Covid precaution items to the Gujjar and Bakarwal community, a Sadhbhavana project was undertaken in the areas of Nihal.

Local populace conveyed their gratitude towards Indian Army for distributing the Covid kits.

The continuous and relentless effort of the Army will boost the morale of the people to fight against the novel coronavirus and also to establish a good rapport between the armed forces and the awam. 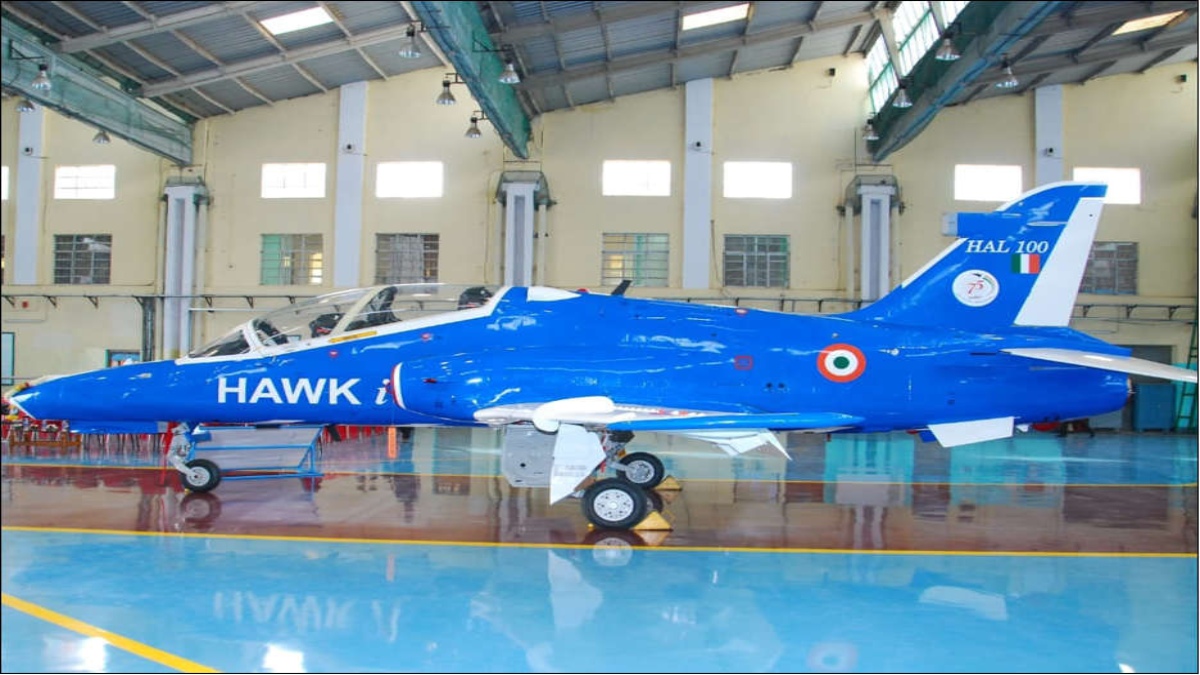 In a big boost to the indigenous Hawk-i program, HAL successfully test fired a Smart Anti Airfield Weapon (SAAW) from the Hawk-i aircraft off the coast of Odisha. The indigenous stand-off weapon developed by Research Centre Imarat (RCI), DRDO is the first smart weapon fired from an Indian Hawk-Mk132. “HAL has been focusing on the Atmanirbhar Bharat campaign. The Company owned Hawk-i platform is being extensively used for certification of systems and weapons developed indigenously by DRDO and CSIR labs” said Mr. R. Madhavan, CMD, HAL.

The aircraft flown by HAL test pilots Wg Cdr (Retd) P Awasthi and Wg Cdr (Retd) M Patel executed the weapon release in a text book manner and all mission objectives were met. The telemetry and tracking systems captured all the mission events confirming the success of the trials. Mr. Arup Chatterjee, Director, Engineering and R&D, HAL said HAL is indigenously enhancing the training and combat capability of Hawk-i. HAL is in discussions with Indian Armed Forces for integration of various weapons on Hawk platform. The Hawk-i is HAL’s internally funded program offering  the Indian Armed Forces an upgrade and combat capability for the Hawk, transforming it into an Advanced Jet Trainer providing training on sensors and weapons in peacetime into a potent combat platform during conflict. The SAAW is an aircraft launched, advanced, precision strike weapon of 125 Kg category used to attack and destroy enemy airfield assets such as radars, bunkers, taxi tracks, runways within a range of 100 kms.  SAAW has been earlier successfully test fired from Jaguar aircraft. 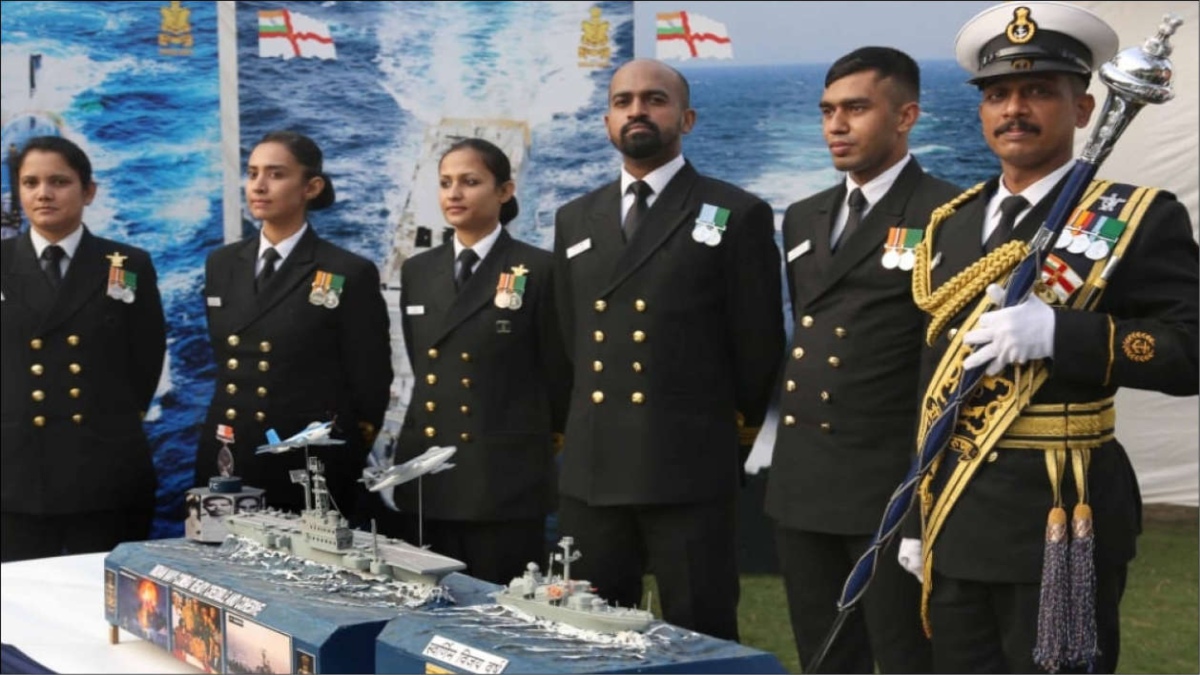 Traditionally, the Naval Tableau paraded during Republic Day Parade is aligned with the Navy’s theme for the year. This year’s theme is Indian Navy—Combat Ready, Credible and Cohesive. The nation is also commemorating the golden jubilee of the victory in 1971 war as Swarnim Vijay Varsh. The Indian Navy proved its mettle as a credible force to reckon in 1971 war proving its combat efficiency and hence this year’s tableau aims to showcase the Navy’s stellar role as a credible force during the 1971 Indo-Pak war. The forward part of the tableau showcases the attack on Karachi harbour by missile boats. The attacks were undertaken as part of Operation Trident on 03th/ 04th Dec night and Operation Python on 8th/9th Dec night. The tableau depicts a missile boat firing the missile and also the route taken by the attacking units during both the operations as track charts on sides of the Tableau. The rear section of the tableau illustrates the Navy’s aircraft carrier INS Vikrant conducting flying operations with Sea Hawk and Alize aircraft. The air operations from Vikrant led to sizeable damage to ships and shore installations of East Pakistan and contributed immensely towards the liberation of Bangladesh.

While we celebrate our victory, The Indian Navy has also acknowledged the courage and sacrifice of the Naval personnel who wrote this glorifying chapter of the Naval history. The tableau showcases photographs of eight naval awardees of Mahavir Chakra one of which was posthumous. On the sides of the trailer are murals depicting various ships that participated in the war, commando operations (Operation X) undertaken by the Navy along with MuktiBahini and the surrender ceremony at Dhaka. While the Navy has many other operations to its credit during the 1971 war, the paucity of space on the tableau precludes showcasing all those elements. The tableau is an attempt to highlight the most significant aspects of Naval operations conducted during 1971 war and pay rich tributes to those who were involved in these. I sincerely hope the Naval tableau would evoke the spirit of pride and patriotism amongst the audience witnessing the parade and a sense of nostalgia amongst those who participated.

Indian Navy Tableau: The tableau being paraded is in pursuance with the Tri-Service theme “Swarnim Vijay Varsh”. The Tableau commanders are Lt Cdr CS Ruben and Lt Cdr Surbhi Sharma. The Indian Navy proved its mettle as a credible force to reckon in 1971 war proving its combat efficiency and hence this year’s tableau aims to showcase the Navy’s stellar role as a credible force during the 1971 Indo-Pak war. 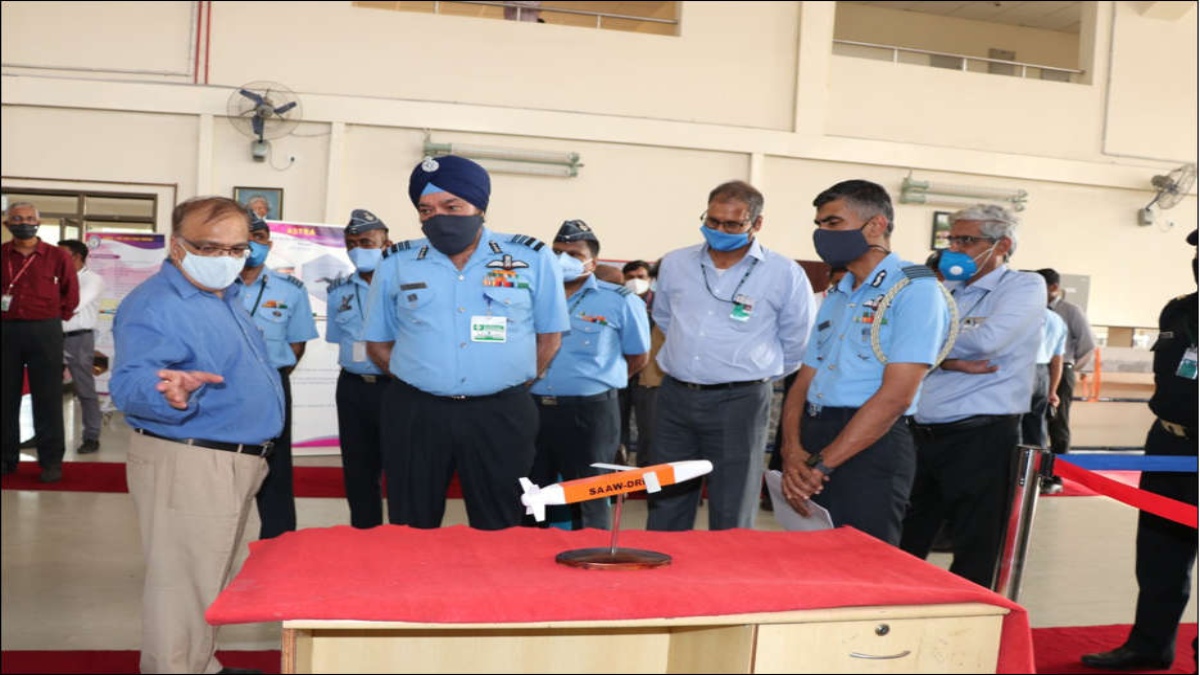 During his visit to the various technology centres at RCI, the Air Marshal undertook review of MRSAM system which is soon to be inducted in the IAF. He interacted with senior scientists of RCI and DRDL. He emphasised on the need for indigenous and mission mode development of missiles and weapon systems. He also assured scientists of full cooperation and support from IAF for the indigenous R&D efforts by DRDO. At Air Force Academy, the VCAS was received by Air Marshal IP Vipin, Commandant Air Force Academy. He was given a detailed presentation on the training activities being undertaken at the Academy. During his visit to AFA, the VCAS inspected and reviewed progress of various critical infrastructure projects being developed at AFA. He also flew a sortie on Pilatus PC-7 Trainer Aircraft and Hawk Aircraft. Pilatus PC-7 trainer and Hawk aircraft have significantly transformed ab initio and intermediate flying training of Pilots in the Indian Air Force.

Apart from imparting training to the fighter pilots of IAF, Hawk aircraft is also used by ‘Suryakiran’ the aerobatic team of IAF. The Air Marshal lauded the relentless efforts and sincere hard work of the Officers and Airmen of Air Force Academy in the process of transforming young Cadets into professional competent Military Officers. 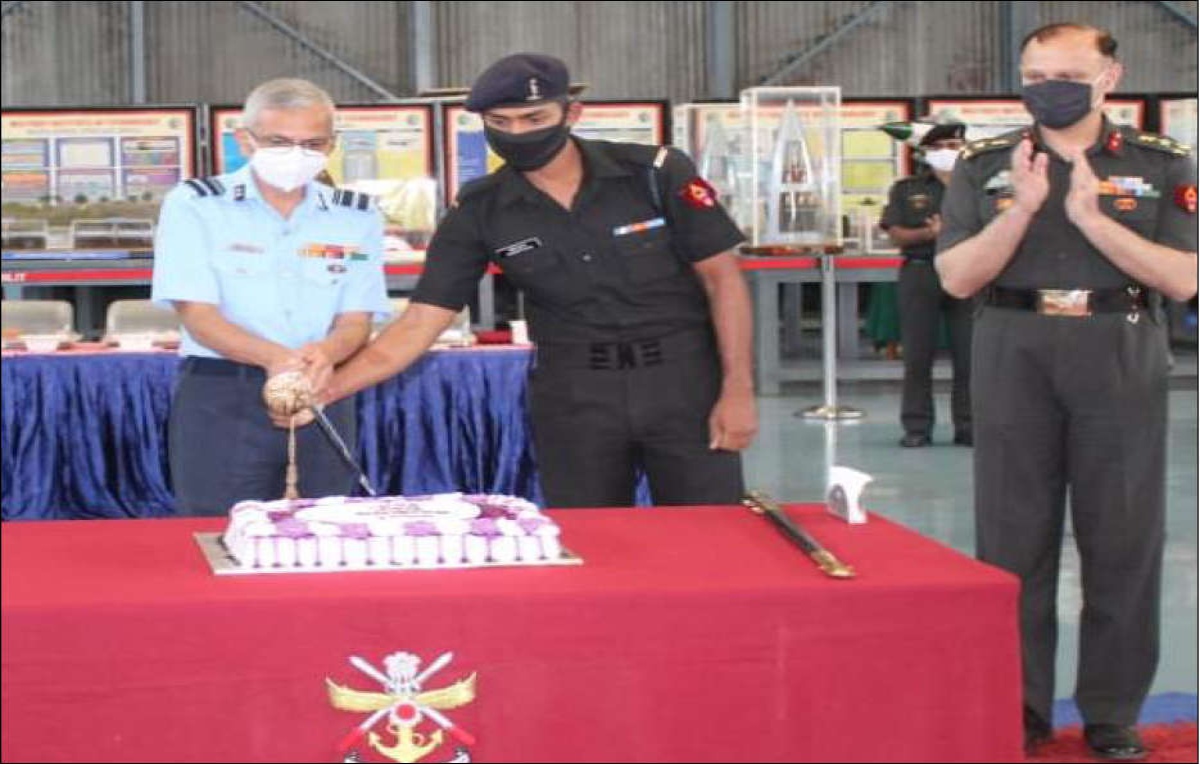 Addressing, the staff at MILIT on the occasion, AVM Vivek Rajhans, VSM, Commandant, recalled achievements of the Institute through the past year and acknowledged the efforts of MILIT in ensuring conduct of training for tri-service officers even in the wake of the COVID-19 pandemic. Other events organised include a lecture by Vice Adm R Hari Kumar, AVSM, VSM, on ‘Theaterisation of the Armed Forces’ which was delivered online and attended by over 150 tri-service officers.

The Institute also undertook a tree plantation drive with the help of Mr Raghunath Maruti Dhole, of Devrai foundation, where in over 650 native trees were have been planted in two separate locations, which would be developed into a ‘Ghann Vann’ (mini dense forest) and a ‘Dev Rai’ (Sacred Grove).

The ship has been at the forefront of major naval operations like 2002 Op Parakram, 2006 Op Sukoon, helping evacuate Indian, Nepalese and Sri Lankan citizens from Lebanon, and 2015 Op Rahat, evacuating Indian and foreign nationals from Yemen. 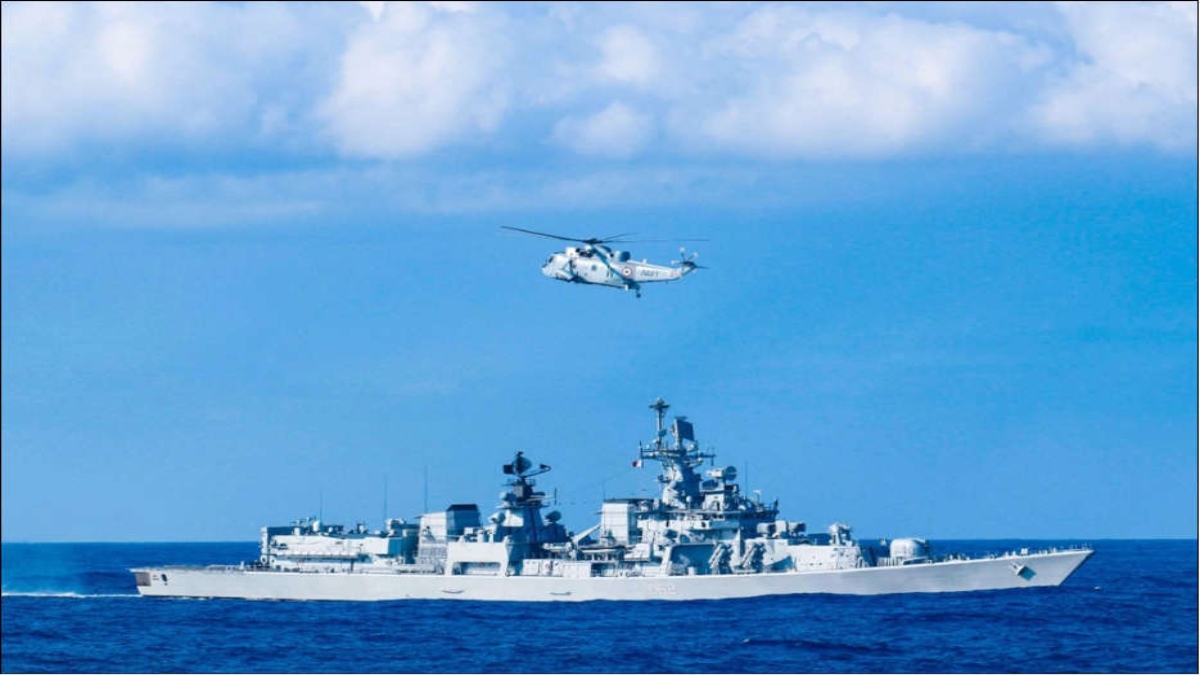 INS Mumbai, a frontline guided missile destroyer of the Indian Navy celebrated her 20th anniversary on 22 January. The ship’s association with Mumbai city is unique as it is the only IN ship stationed at her namesake city.

The ship has an extremely illustrious lineage and rich legacy of dominance at sea since her first avatar of HCS Bombay in 18th century. Of the fifteen ‘Bombays’, preceding the present one, nine were warships. The tenth one is named after “Mumbai” in tune with change in nomenclature of the city.

The ship’s motto is “Aham Prayptam Tvidametesam Balam”, which translates to “I am Invincible”, resonates with the spirit of the  city. The ship’s crest also draws inspiration from the City depicting the main gateway entrance to the Bombay Castle Barracks commissioned in 1951 in the honour of great Maratha Admiral Kanhoji Angre.

INS Mumbai, built indigenously at Mazagon Dock, is the latest of three P-15 class destroyers and was commissioned by the then Governor of Maharashtra Dr P.C. Alexander. Since commissioning, the ship has rendered yeoman service to the nation and has always excelled in all her endeavours. She was adjudged the ‘Best Ship’ thrice and the ‘Most Spirited Ship’ twice which is a rare feat for any warship.

With a displacement of over 6500 tons, the ship is manned by 350 sailors and 40 officers. The majestic ship spanning 163 metres in length, 17 metres at the beam, propelled by four gas turbines is capable of achieving speeds in excess of 32 knots.  Fitted with an enviable, state-of-the-art weapons suite, which includes Surface to Surface Missiles, Surface to Air Missiles, Anti-Submarine rockets and torpedoes, the ship can unleash lethal firepower upon the enemy. The ship also operates all kinds of helicopters in the naval inventory, which are its extended eyes and ears.

With an aim of fostering greater understanding of combat-potential and synergising the available means and resources of the armed forces, the ship is affiliated to Maratha Light Infantry Regiment of the Indian Army. The raison d’etre of the affiliation is to produce a battle winning combination in war.

Interestingly, various parts of the ship have been christened after iconic locales in the city of Mumbai. To name a few, the entrance to the ship is called the ‘Gateway’, dining halls are called ‘Khau Galli’, and the Flag staff light is called ‘Prongs Lighthouse’. Tucked away like ‘Virar’ in one corner is the Quarterdeck, while the Helo deck is known as ‘Sahar Airport’ and the awe-inspiring panoramic view from the ship’s bridge is referred to as ‘Malabar Hill’.

To commemorate her 20th anniversary, various events like blood donation camp, tree plantation drive and a run between two prominent locations of Mumbai; Girgaon Chowpati to JK Kapur Chowk, Worli, where, the ship’s model is installed, were conducted. 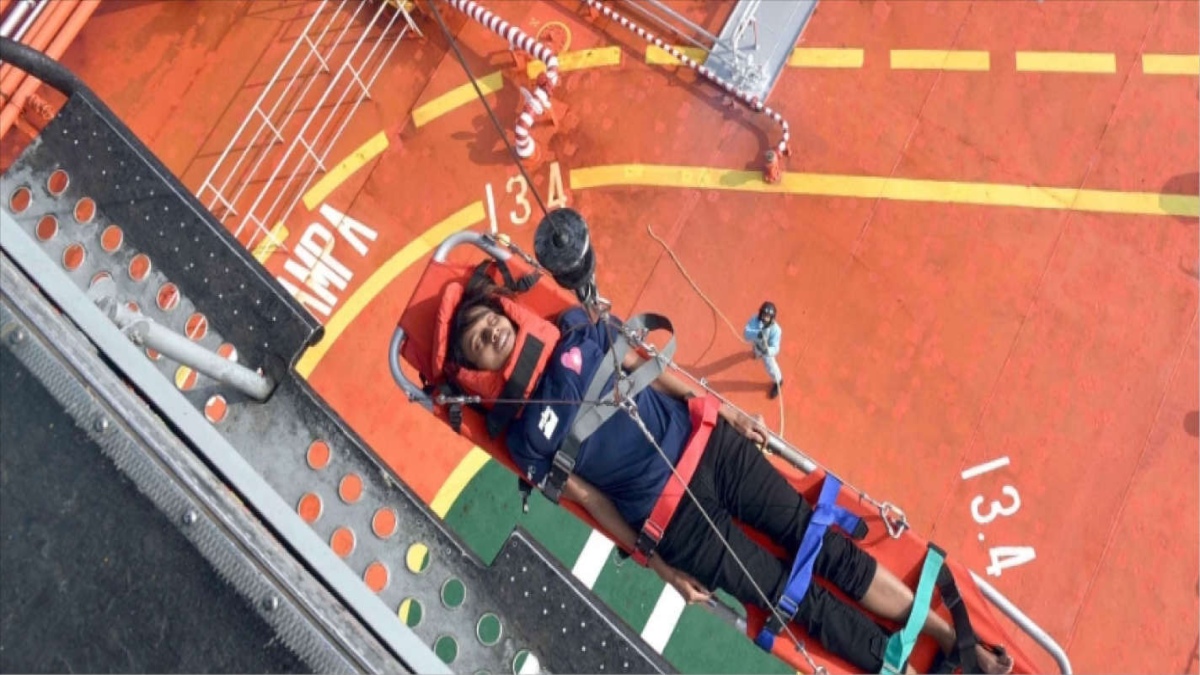 On 21 January, based on an input received regarding a medical emergency onboard a Singapore flag merchant vessel MV Eagle Tampa received at the Joint Operations Center at Headquarters Western Naval Command, a Medical Evacuation (MEDEVAC) was executed by the Indian Navy. The ship, which was 18 nautical miles off the coast of Mumbai, reported a patient, Geetha Selvaraja, a 34-year-old Malaysian citizen, to be suffering from gastroesophageal reflux disease and was experiencing difficulty in breathing.

The helicopter picked up the patient from the ship and returned to INS Shikra. The patient was then transferred to Saifee hospital by private ambulance.