India is getting closer to the top teams in world, says women’s hockey coach Marijne 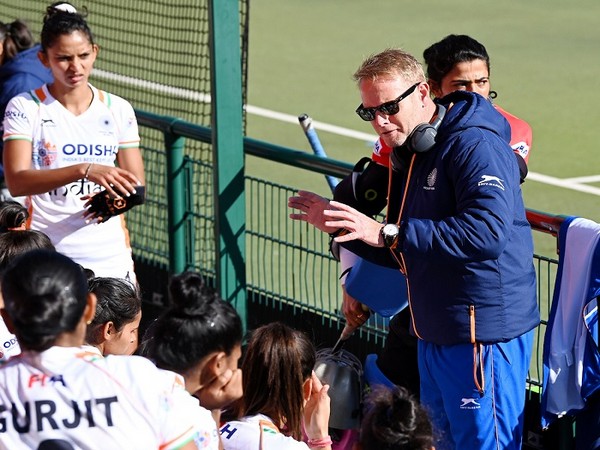 New Delhi [India], March 5 (ANI): The Indian women’s hockey team chief coach Sjoerd Marjine feels the side is getting closer to operating at the same level as the top teams in the world.
The World No. 9 Indian team battled well against the World No. 3 Germany team, but went down 0-5, 0-1, 0-2 and 1-2 in the four matches of the tour, which was held from February 27 to March 4 in Dusseldorf, Germany. Marijne and his team will now head to SAI Centre, Bengaluru for a month-long National Coaching camp.
The Indian women’s hockey team returned to action against Argentina earlier this year, where they were praised for their resilience on the tour. Marijne was happy with how his side competed against Germany as well.
“We have played against two different styles of teams and who are among the top three teams in the world. The tours helped us to understand their tactics and also to see what the benchmark needs to be to beat these teams,” said Marijne in a Hockey India release.
“Although the results were not in our favour, we are getting closer to them. Germany is a very well-organised team with a very good structure and it’s not easy to create chances against them. We were able to create enough possibilities to score in every match, but we didn’t finish well. This is something we need to work on in the next following months. We did test them in parts and have some homework to do,” he added.
Despite going down 0-5 in the first match of the tour, Rani and her side picked themselves up in the next three games. There were occasions where Germany struggled to break the Indian defence down, which impressed Marijne.
“We played that match (first match of the tour) pretty well, but every opportunity was converted into a goal by Germany. That match was a benchmark for the next following matches. I think we did well on the tour, but you have to keep looking at the bigger picture and not only focus on the results of this tour,” said the coach.
Marijne has asked his team not to be disheartened by the results in Germany as he feels fortunes can change during the Tokyo Olympics later this year.
“We couldn’t win a medal here in Germany, but we can in Tokyo and that’s why I keep looking at the performances. We were able to keep the ball longer, we intercepted some good balls but the things we need to improve in finishing and defending in the circle,” said Marijne
“Against teams like these, you need to create your chances and if you don’t, they will do for sure and that’s what happened on this tour. I am happy we were able to create some chances and now we need to work on finishing our opportunities,” he signed off. (ANI)