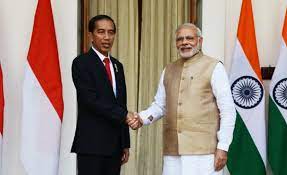 It’s been more than two thousand years since India and Indonesia share civilizational links and are neighbours and strategic partners.  Both the countries have excellent relations and have massive potential to grow in the upcoming years.

“Relations between India and Indonesia stand strong during both good and difficult times. In 2018, when Indonesia was affected by an earthquake, we immediately started operation SamudraMaitri,” Prime Minister Narendra Modi said while addressing a gathering of Indian Diaspora living in Indonesia and Friends of India in Indonesia in Bali on Tuesday.

PM Modi highlighted Odisha’s Bali Jatra, a maritime journey from Odisha to Indonesia’s Bali in the past, an annual trade and commerce fair on the banks of the Mahanadi river in Cuttack to commemorate the rich maritime history of the state.

“When people of Indonesia see photos of this year’s Bali Jatra on the internet, they’ll be proud and happy. Due to the issues arising due to COVID, some hurdles had cropped up. After several years, Bali JatraMahotsav is being celebrated on a grand scale with mass participation in Odisha,” said PM Modi.

Indonesia while being a Muslim majority country leaves no stone unturned in embracing Ramayana in unique ways. The performers of the famous Ramayana ballet at the Prambanan temple in Central Java are all Muslims. The Indian Epics — the Ramayana and the Mahabarata — play an important role in Indonesian culture and history, and are popular amongst Indonesians today.