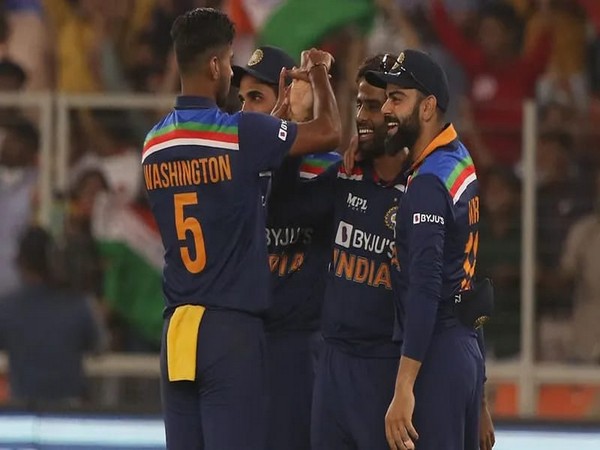 Ahmedabad (Gujarat) [India], March 14 (ANI): A perfect display of death bowling on Sunday helped India restrict England to 164/6 in the second T20I of the five-match series here at the Narendra Modi Stadium.
Put in to bat, England got off to the worst start possible as Bhuvneshwar Kumar had Jos Buttler (0) adjudged leg before wicket on just the third ball of the innings. Dawid Malan then joined Jason Roy in the middle and the duo revived the innings for the visitors, taking the score to 44/1 after the end of the powerplay.
Malan and Roy eventually stitched a 63-run stand for the second wicket which came to an end in the ninth over after leg-spinner Yuzvendra Chahal had Malan (24) adjudged leg-before wicket, reducing England to 64/2.
Roy (46), for the second time in a row, then missed out on his half-century as he was sent back to the pavilion in the 12th over by Washington Sundar. The right-handed batsman went for a big shot, but he ended up holding out to Bhuvneshwar in the deep. Jonny Bairstow (20) got a reprieve in the 14th over of the innings, but he was sent back to the dressing room in the very same over by Sundar.
In the final four overs, the Virat Kohli-led side conceded just 28 runs and as a result, England was restricted under the 170-run mark. For the hosts, Washington Sundar and Shardul Thakur returned with two wickets. Ben Stokes was dismissed after playing a knock of 24 while Sam Curran remained unbeaten on 6. Skipper Eoin Morgan also contributed with 28.
Brief Scores: England 164/6 (Jason Roy 46, Eoin Morgan 28, Shardul Thakur 2-29) vs India. (ANI)