I do not have that desperation to reach a milestone, says Kohli 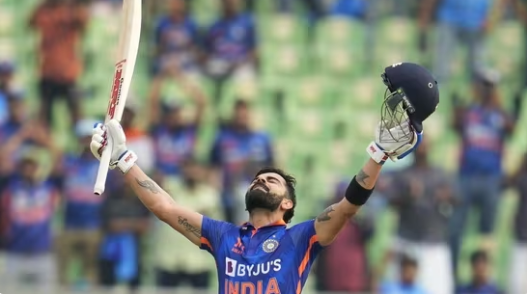 Following his match-winning century in the third ODI against Sri Lanka, star Indian batter Virat Kohli said that he aims to bat with attacking intent and is not desperate to get to a milestone. A destructive powerplay spell from Mohammed Siraj continued Sri Lanka’s downfall for the third straight ODI, helping the hosts clinch a massive 317-run win in the final ODI at Kerala on Sunday. Virat Kohli won the ‘Man of the Match’ award for his match-winning ton and also the ‘Man of the Series’ for scoring 283 runs in the series, which included two centuries.

“I have no idea (about the MoS awards he has won). For me, it is just a byproduct of the intent I have, the mindset that I play with. Mindset is always to help the team win, bat for as long as possible and if you do that, you end up making a difference. I have always played for the right reasons, help the team as much as possible. It is just intent, playing for the right reasons,” said Virat in a postmatch presentation. “Ever since I came back from the long break, I have been feeling good. I do not have that desperation to get to a milestone. I am just enjoying my batting, being in a space where I can relax. Today as well, I was just happy to be out there batting. I am in a nice space right now and want this to continue.”

“Shami has always been there for us but the way Siraj has come up has been outstanding. He has taken the maximum number of wickets in the powerplay, which was an issue for us early. He is always making the batters think, which is a great sign for us going into the World Cup,” concluded Virat while lauding Shami and Siraj for their performances. With this win, India has clinched the series 3-0. They have also recorded the biggest win in terms of runs in the history of ODI cricket and are the first team ever to register a win by a margin of 300 runs or more. Electing to bat first, India got off to a wonderful start, with skipper Rohit Sharma (42) having an opening stand of 95 runs with Shubman Gill. Later, Gill teamed with Virat Kohli to stitch a 131- run second wicket stand and brought up his second ODI ton, before being dismissed for 116 off 97 balls. Virat took Lankan bowlers to the attack, smashing an unbeaten 166 off 110 balls, consisting of 12 fours and eight sixes.