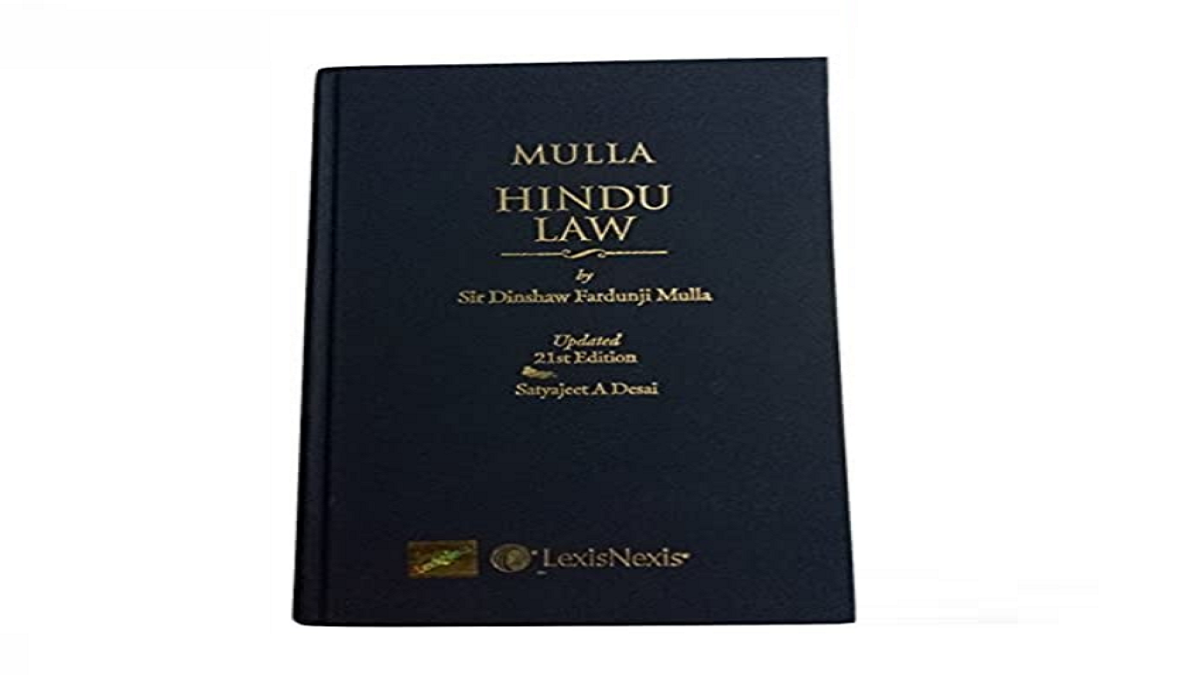 If we look at the probable statistics of litigation in this country, at least 50% of the litigation is against government authorities. From the remaining 50%, at least 30-40% is related to property disputes alone.

Succession law, though a very important and intrinsic part of the whole conspectus of laws, is also a very interesting but extremely difficult subject due to its intricacies. Succession to property has, in the past, the world over, led to wars between siblings. The era of Kings being over, the arena then shifted to the courts in the modern world. Acrimony over property has always been the reason for long drawn disputes.

In India, since many years in the ancient past, and especially in case of Hindu’s, we had what can be called the Shastric or traditional Hindu Law, the predecessor of modern statutory Hindu Laws, as we have them today.

Any person professing or following a particular religion should be aware of rights and obligations under their personal law. Before the enactment of the four laws governing Hindus these complex issues were regulated by Dharma, the Vedas and other sources which were believed to be either of divine origin or were formulated by Acharyas and Rishis who were well versed in the study of religion and its various intricacies which were recognised as the law. This was because it was strongly believed that morals and ethics when combined with self imposed restrictions and conditions were expedient to regulate society. These were in the past, the law of the land and any breach was considered as a breach of the law. This was the foundation of the laws relating to Hindus, which has, with the passage of time evolved into the present legislations of Hindu Law as we know them today1 .

The Codification of Hindu Laws

Four laws governing Hindus namely the Hindu Succession Act, the Hindu Marriage Act, The Hindu Adoptions and Maintenance Act and the Hindu Minority and Guardianship Act, came into force in 1955 and 1956. The laws have taken care to incorporate some of the ancient aspects coupled with progressive thinking in their application. In fact, many principles of the old law were introduced into the modern Hindu Law. Certain aspects were, however abandoned, which has been rued by many as a decimation of the old Hindu Laws. But the words of J.D.M. Derret , a legal scholar on Hindu Succession in his book titled “Introduction to Modern Hindu Law”, say it all. He wrote “In India the law of inheritance has been so recently and so comprehensively reformed that no one need fear dying intestate, that is to say, without leaving a will which is capable of taking effect. In a sense Parliament has made, in the Hindu Succession Act a will for everyone, and whoever proposes to make  a will should consider whether every eventuality bas not been foreseen by Parliament, and whether his own preferences would be an improvement.

That brings us to the Hindu Succession Act 1956 as we know it today. I propose to discuss albeit briefly, some important provisions. The act deals with succession to property of a male Hindu (section 8), Rights of a female Hindu over property (section 14), succession to property of a female Hindu (section 15) and most importantly, succession in case of coparcenary property (section 6, which I propose to discuss in a subsequent article). The Act lays down a uniform and comprehensive system of inheritance.

Succession to the property of a Hindu Male dying intestate

When a male Hindu dies intestate the following section applies. It stipulates that;

S.8 General rules of succession in the case of males

(a) firstly, upon the heirs, being the relatives specified in class I of the Schedule;

(b) secondly, if there is no heir of Class I then upon the heirs, being the relatives specified in Class II of the Schedule;

(c) thirdly, if there is no heir of any of the two classes, then upon the agnates of the deceased; and

(d) lastly, if there is no agnate, then upon the cognates of the deceased.

HEIRS IN CLASS I AND CLASS II

This provision deals with the status of property possessed by a female Hindu.

Section 14. Property of a female Hindu to be her absolute property.—(1) Any property possessed by a female Hindu, whether acquired before or after the commencement of this Act, shall be held by her as full owner thereof and not as a limited owner.

Explanation.—In this sub-section, ‘property’ includes both movable and immovable property acquired by a female Hindu by inheritance or devise, or at a partition, or in lieu of maintenance or arrears of maintenance, or by gift from any person, whether a relative or not, before, at or after her marriage, or by her own skill or exertion, or by purchase or by prescription, or in any other manner whatsoever, and also any such property held by her as stridhana immediately before the commencement of this Act.

The section brought about an extremely important change from the Shastric Hindu law, where there were restrictions and conditions imposed upon a woman’s ownership of property. As can be seen. The first part of the section stipulates that any property possessed by a female Hindu, whether acquired before or after the commencement of this Act, shall be held by her as full owner thereof and not as a limited owner. Therefore the law made it amply clear that a woman has full ownership of property possessed by her. The explanation to the section also makes it abundantly clear that the modes of ownership stipulated therein constitute the property as her own. But it is the second part of the section that states that if a Hindu female has got property in the manner described, and if a restricted ownership is prescribed then she does not become full owner.

The second part of the section has come up for interpretation on various occasions before the courts. In a benchmark decision of the Supreme Court in V. Tulasamma & Ors vs V. Sesha Reddy (reported in AIR 1977 SC 1944), the court held that a wide interpretation ought to be given to such an ameliorative provision and declaired that property ,even though conferred as a limited estate but for the purpose of maintenance of the woman would confer full ownership upon her. This section can have no application where a female Hindu never acquired any property at all or where having acquired it she happened to have lost her title thereto by alienation, surrender or otherwise. Explaining the ethos of the provision , the Supreme Court has stated in C. Masilamani Mudaliar & Ors vs The Idol Of Sri Swaminath Swamy, (1996) 8 SCC 525 that if the acquisition of the property attracts sub-section [1] of Section 14, sub-section [2] does not come into play. If the acquisition is for the first time, without any vestige of pre-existing right under the instrument, document or device etc. then sub-section [2] of Section 14 gets attracted. Sub-section [2] being in the nature of an exception, it does not engulf and wipe out the operation of subsection [1]. Sub-section [2] of Section 14 independently operates in its own sphere. Therefore it can be clearly seen that the legislative intent was to see to it that a Hindu female was conferred with adequate rights in property, and that the concept of restricted estate would only apply in stricter circumstances where restrictions were stringent.

This section deals with the distribution of property of a Hindu female dying intestate. It stipulates that; 15. General rules of succession in the case of female Hindus.—

(1) The property of a female Hindu dying intestate shall devolve according to the rules set out in section 16,—

(a) firstly, upon the sons and daughters (including the children of any pre-deceased son or daughter) and the husband;

(b) secondly, upon the heirs of the husband;

(c) thirdly, upon the mother and father;

(d) fourthly, upon the heirs of the father; and

(e) lastly, upon the heirs of the mother.

(2) Notwithstanding anything contained in sub-section (1),—

(a) any property inherited by a female Hindu from her father or mother shall devolve, in the absence of any son or daughter of the deceased (including the children of any pre-deceased son or daughter) not upon the other heirs referred to in sub-section (1) in the order specified therein, but upon the heirs of the father; and

(b) any property inherited by a female Hindu from her husband or from her father-in-law shall devolve, in the absence of any son or daughter of the deceased (including the children of any pre-deceased son or daughter) not upon the other heirs referred to in sub-section (1) in the order specified therein, but upon the heirs of the husband.

The basis of inheritance of a female Hindu’s property who dies intestate would thus be the source from which such female Hindu came into possession of the property and the manner of inheritance which would decide the manner of devolution as held by the Supreme Court in Bhagat Ram v. Teja Singh AIR 2002 SC 1. The Court in a subsequent decision in S.R. Srinivasa v S. Padmavathamma, (2010) 5 SCC 274 stated that in case of property of an issueless female, this particular provision has been enacted to prevent the property going into the hands of strangers.

The Hindu Succession Act deals mainly with intestate succession but section 30 of the Act deals with testamentary succession. It states that;

Section 30. Any Hindu may dispose of by will or other testamentary disposition any property, which is capable of being so disposed of by him, in accordance with the provisions of the Indian Succession Act, 1925 (39 of 1925), or any other law for the time being in force and applicable to Hindus.

Explanation: The interest of a male Hindu in a Mitakshara coparcenary property or the interest of a member of a tarward, tavazhi, illom, kutumba or kavaru in the property of the tarward, tavazhi , illom, kutumba or kavaru shall, notwithstanding anything contained in this Act or in any other law for the time being in force, be deemed to be property capable of being disposed of by him or by her within the meaning of this section.

Under Shastric law, wills were alien to Hindu’s. This was in view of the joint family system. It was only in 1870, with the passing of the Hindu Wills Act that wills for Hindus were codified. Section 30 of the Hindu Succession Act, recognises the right of a Hindu to execute a will. The words ‘ capable of being disposed of’ assume significance. The explanation makes it clear that a Hindu can, apart from self acquired property, also include in the will ‘interest in Mitakshara coparcenary property…’. I add a cautionary caveat here. The will can only deal with a portion of the property by virtue of being a member of a Mitakshara coparcenary, but neither of a specific portion nor of the whole of the property. It has to be restricted to his share alone.

These then are some important provisions as to succession to Hindus, both male and female.

Senior Advocate Satyajeet Desai practices at the Gujarat High Court and is a Revising Author – Mulla’s Hindu Law & ST Desai on The Law of Partnership.