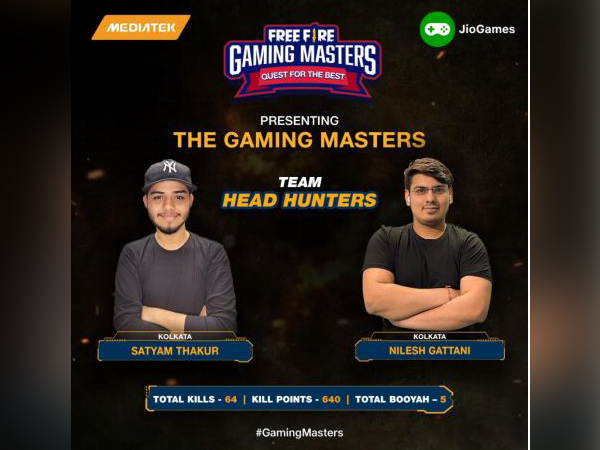 Mumbai (Maharashtra) [India], March 17 (ANI): Jio and MediaTek concluded ‘Gaming Masters’, a 70-day Esports tournament, which according to them received an overwhelming response from gaming enthusiasts all over the country.
The tournament that started on January 13 featuring Garena’s Free Fire game; with solo and duo categories, running in parallel for seven weeks with over 43,000 teams.
Among the tournament’s highlights included the participation of over 43,000 teams created during the launch of the tournament.
The tournament witnessed high engagement with over 10 million views from Jio and non Jio subscribers on the streaming platforms
The entire tournament was broadcast live in Hindi and English on JioTV HD Esports Channel, Booyah and YouTube
Team Head Hunters won the Gaming Masters and were awarded Gaming Masters title and took home a winning amount of Rs 3 lakh.
“MediaTek is proud to have partnered with Jio in successfully organising the revolutionary Esports tournament ‘Free Fire Gaming Masters’ powered by the JioGames,” quoted MediaTek’s spokesperson.
The Esports tournament has emerged as one of the largest online-gaming events on the JioGames Platform in 2021.
“The success of the Free Fire Gaming Masters powered by the JioGames Esports tournament reiterated the popularity of the growing e-sports industry in India, which has been witnessing a significant surge in user base and is estimated to continue to grow significantly in a post-pandemic world. According to estimations by a CMR report, the number of mobile gaming users will cross 748 million by 2021, the MediaTek spokesperson said.
“Furthermore, Esports tournaments such as the Free Fire Gaming Masters powered by JioGames help us provide a platform for budding gamers across the country to showcase their talent and fulfill their dreams,” quoted MediaTek’s spokesperson.
Satyam and Nilesh of the winning team Team Head Hunters described it as a great experience.
“It was a great experience for us, thanks to JioGames and MediaTek for providing us the platform to showcase our talent. The Tournament spanned for more than two months, a huge shout-out to the management for handling the stuff. We didn’t have that much of a great start, but the third map turned out great for us, after which we had a quite consistent performance. The other Kalahari map in which we had a booyah also helped us a lot to boost our points and become the table toppers,”.
“As you know consistency is the key to success in ESports, we were just aiming to be consistent, we could have lost our top post if we faced early-elimination in any game and you can’t afford to make mistakes if you’re playing on such a big stage. The competition was very intense as the top 24 teams of the server were competing for the grand prize. Players are always waiting for a platform to showcase their skills and talent and JioGames provided them a huge platform, looking forward to more such Tournaments in the future from JioGames,” the winners said (ANI)