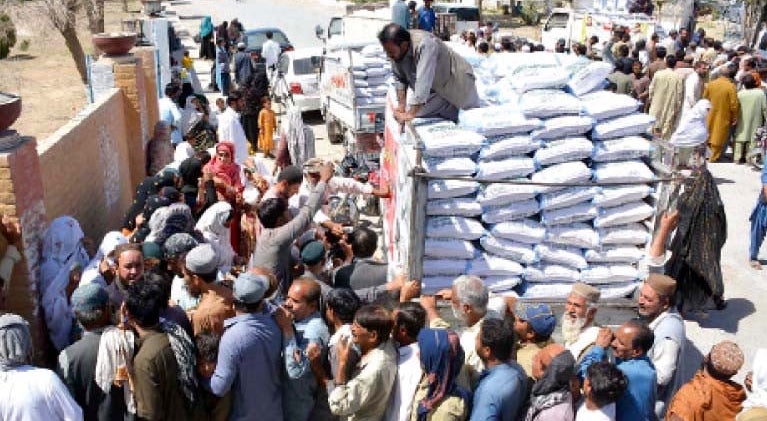 Amid the deepening food crisis in Pakistan, people were seen chasing a wheat truck on their bikes, risking their lives to get a bag of wheat. Pakistan is facing the worst food crisis in the years and country’s burgeoning food shortage and a looming economic crisis are already being felt by country’s poorest. As compared to last year, the weekly food inflation has also increased by nearly 31% which also adds up to shortage of foreign exchange making people bear the brunt shortage of necessities as basic as food and energy. The videos circulating on social media show deep extent to which people are going to get their hands on 1 kg of flour, to collect government-subsidised flour. As per the local media, long queues leading to stamped only to collect government subsidised flour is also reported. Streets of Pakistan are witnessing brawl and ruckus over the packets of flour. Civilians also carried out a massive protest in different parts of Pakistan in the wake of sudden price rise of the staple food items as the prices of essential food items have skyrocketed in Khyber Pakhtunkhwa, Sindh and Balochistan provinces. Flour in Karachi is being sold from Rs 140 per kilogram to Rs 160 per kilogram. In Islamabad and Peshawar, a bag of 10kg flour is being sold at Rs 1,500 per kilogram while a 20-kilogram bag of flour is being sold at Rs 2,800. Mill owners in Punjab province have increased the price of flour to Rs 160 per kilogram. According to Dawn, a Pakistan based newspaper, a surge in prices of pulse is also reported due to the non-clearance of the imported shipments at the port and delay in receiving approval of concerned documents by banks. Amid the ongoing food crisis in the country, Pakistan Kissan Ittehad (PKI), the farmer’s body also urged the authorities to impose agricultural emergency in the country. The PKI leader at a press conference referred to market fertilizer shortages and urged the government to take prompt action.