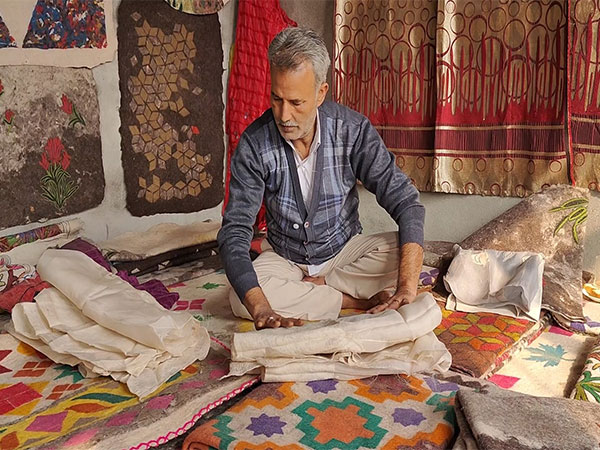 Farooq Ahmed, a master artisan from Srinagar, has given the industry new life by integrating it with contemporary technology. He has created a brand-new craft that is unparalleled in the entire globe by fusing traditional handicrafts with the Australia-based “Nano Felting Technique.”

Farooq Ahmed is the only artist in India who has merged this with conventional felting as a result. Using this method, new handicrafts, silk carpets, and scarves are being produced.

The general public enjoys the goods they produce.

It is important to note that the Kashmir valley is home to numerous ancient crafts, including paper mashi, shawl and carpet weaving, handloom, khatband, wood carving, namda sazi, and gaba sazi.

In this situation, combining these crafts with contemporary methods is thought to be beneficial.

In an interview, Farooq Ahmed stated that it took him at least two years to learn this skill, during which time he was able to produce these cutting-edge products only after nonstop workdays and nights. He claimed that a Delhi-based designer assisted him in learning this novel technique.

“He helped me a lot. When he told me this technique, I didn’t think that I would be able to learn it, but Alhamdulillah, after a lot of hard work, I succeeded in it.”

Remember that Farooq Khan’s family has a long history in the textile business, and that he is considered to be the last hope for the Kashmiri textile sector. Additionally, he has been honoured on both a national and local level. As a result of their efforts, the traditional art of Kashmir is now incorporating numerous new designs and techniques. They claim that by revitalising Kashmir’s traditional handicrafts with these goods, they are attempting to revive the glory of this dying craft.

While developing this new method with a private craft company, Farooq Khan is not pleased with government initiatives to support artisans.

“There is no support at the government level to promote this craft while raw materials are also not available in the valley,” he said.

Farooq Khan claims that he is the only artisan who creates new products using this technique.
“To the best of my knowledge, I am the only craftsman to create a new product with such a technique.”