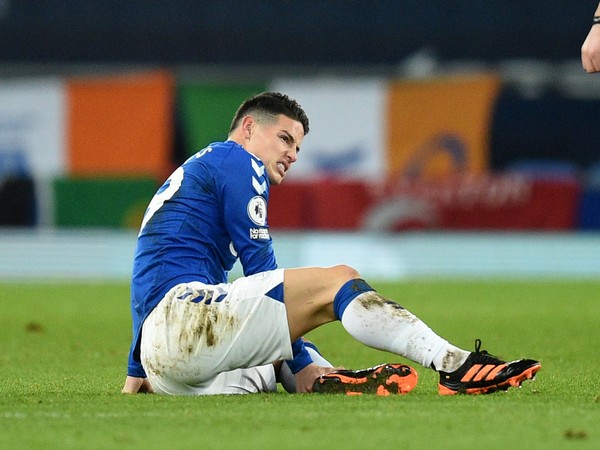 Liverpool [UK], March 13 (ANI): Everton manager Carlo Ancelotti informed that midfielder James Rodriguez will miss Saturday’s home fixture against Burnley and added that Abdoulaye Doucoure could miss the next “eight to 10 weeks” after suffering a “small fracture” on his foot.
“James had problems on his calf in the games against Manchester United and Liverpool. His calf became tight. To avoid this tightness, we prefer to keep him out to recover properly for when he is ready to start to train with the team and play at his best,” the club’s official website quoted Ancelotti as saying.
“We don’t want him to play [at the moment] because he would risk a bigger injury. We want to avoid this kind of tightness in his calf, which he has after 45 or 60 minutes in games. We have to do a proper recovery and special exercise for him to improve his calf condition,” he added.
Ancelotti stressed that James’ injury is “not a big problem” and the playmaker could be available after the international break.
“We have taken this decision together. We are going to have really important games until the end of the season, we decided to give him a proper recovery and don’t have him play at 70 or 80 per cent fit. Of course, the player wants to play, but it’s better for him to solve the problem. That can be after the international break [when he can play again]. I think we can count on him then. It is not a big problem,” he said.
Ancelotti admitted Doucoure’s extended spell on the sidelines is a blow but is hopeful he could return before the end of the campaign. And he is confident the depth of midfield talent within the Everton squad can help the Blues “manage” in the influential Frenchman’s absence.
“Doucoure has a small fracture on his foot so he has to stay out. I don’t know how long, maybe eight weeks or maybe 10 weeks. I hope he can recover before the end of the season. He is an important player for us,” Ancelotti said.
“But we are not the only club that has had to deal with injuries. In this period, there are a lot of injuries. We were able to manage without Allan and Lucas Digne for a long time. We have Tom Davies back, along with Seamus Coleman and Yerry Mina. I think we can manage,” he added.
Yerry Mina and Seamus Coleman have returned to training and are in contention for Saturday’s game but Gylfi Sigurdsson is a doubt after sustaining an ankle knock against Chelsea on Monday.
Robin Olsen’s fitness will be assessed on Friday to determine his availability.
Fabian Delph remains out with a tendon issue, while Jean-Philippe Gbamin is continuing his rehabilitation from an Achilles injury.
Everton will take on Burnley in the Premier League clash at Goodison Park on Saturday. (ANI)