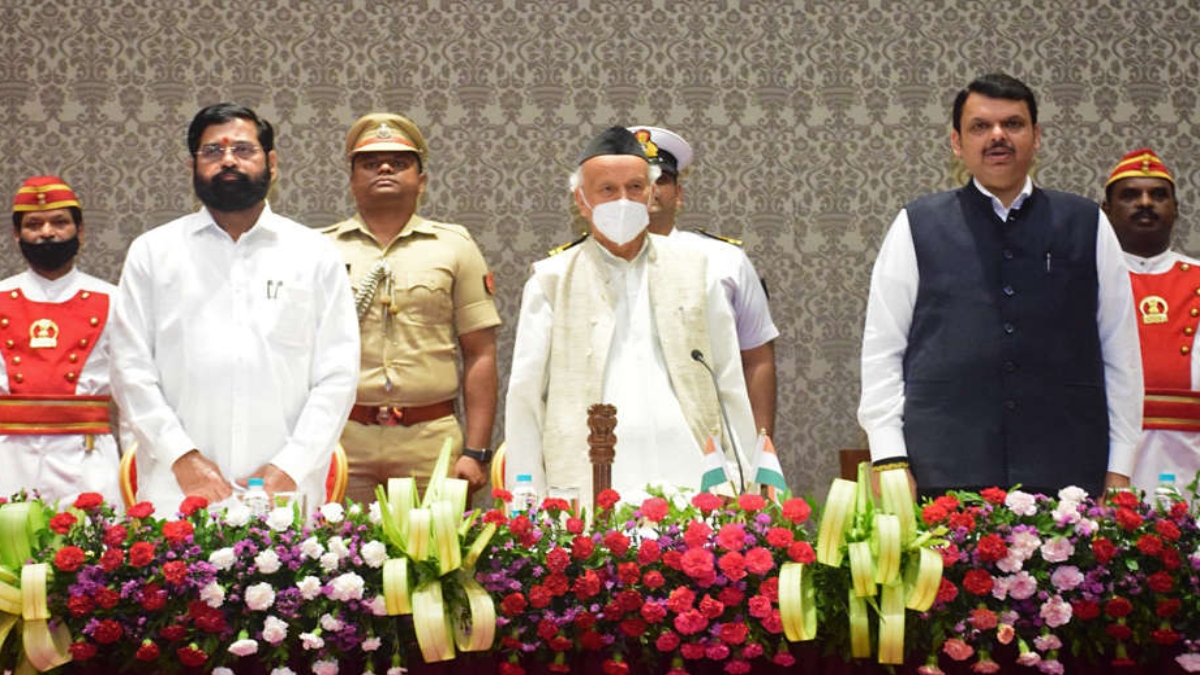 Putting an end to the ongoing political drama in government formation in Maharashtra, rebel Shiv Sena leader Eknath Shinde was sworn in as Chief Minister of Maharashtra on Thursday 7.30 pm by Governor Bhagat Singh Koshyari. Surprisingly, BJP’s Devendra Fadnavis, who was the frontrunner for the post of chief minister, took oath as his deputy.

As the development sent shockwaves, the union Home Minister, Amit Shah and the BJP chief JP Nadda congratulated Fadnavis for showing “big heart”. Shah said in a tweet that Fadnavis’s decision reflects his true dedication and attitude of service towards Maharashtra.

Shinde would be the twentieth Chief Minister of the state. The rest of his ministerial colleagues from his Shiv Sena faction, the BJP and Independent legislators would be administered oath of office on a later date.

In the present 288-member Maharashtra Assembly, the BJP has 106 MLAs and Shinde is leading 39 rebel Shiv Sena legislators and some Independents. Passing the muster for a majority mark of 144 would not be a problem for the Shinde–BJP alliance.

With Shinde’s swearing in has come to an end the 10-day-long political high drama that began on 20 June after Shinde and other rebel MLAs disappeared from Mumbai only be discovered camping in Goa. The Shinde faction is alleged to have helped BJP candidates to sail through both in RS and in Legislative Council elections. All kinds of cajoling and veiled threats did not work as Shinde remained adamant on his demand seeking Udhav Thackeray sever ties with Maha Vikas Agadi (MVA) alliance partners, the Nationalist Congress Party and Indian National Congress.

Things came to a head after Deputy Speaker Narhari Zirwal initiated disqualification proceedings against 16 Shiv Sena rebel legislators, including Shinde. The matter reached the Supreme Court, which gave a go ahead to the floor test ordered by Governor Koshyari, thus sealing Thackeray and his MVA government’s fate. Knowing well he has lost the numbers game, Thackeray chose to step down and tendered his resignation on Wednesday evening.

With Fadnavis by his side, Shinde was all praise for the BJP leadership including Prime Minister Narendra Modi, Home Minister Amit Shah and Fadnavis. Addressing the joint press conference in the day, Shinde said, “Today BJP has taken a decision, even though they have 120 MLAs, yet they have given the chief ministerial berth to me. However he has shown a big heart and has supported Balasaheb’s Shiv Sainik. I thank Devendra ji, PM and Amit Shah and thank him from the bottom of my heart.” Fadnavi on his part assured all support to the Shinde-led government. “I will ensure that the government works properly. This is not a fight for power but for Hindutva,” he told the media persons.

In the meanwhile, Deepak Kesarkar, spokesperson for the Shinde faction of Shiv Sena issued a veiled threat to the remaining Shiv Sena legislators who still owe allegiance to Thackeray to fall in line or lose their status as legislators. “We are the Shiv Sena. We will not merge with any party. The remaining 16 MLAs will have to follow the whip of our group leaders. Otherwise, they will lose their MLA post,” said Kesarkar.