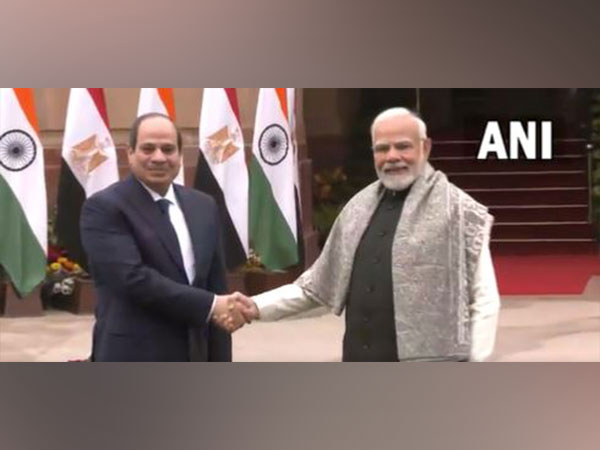 Addressing a joint media statement Egyptian President said “I am going to take part in the Republic Day parade. I am thankful to PM Modi for such a grand welcome. During our discussions, we talked about trade and investment and how to further expand our cooperation in import and export,” the Egyptian President said.

“I met PM Modi in 2015 in New York and I had full confidence in him. I knew he will take his nation forward. I have invited Prime Minister Modi to Cairo, Egypt to complete our talks and elevate the ties between the two nations to a strategic partnership.”

Earlier PM Modi on Wednesday said India has decided to elevate bilateral relations with Egypt to a strategic partnership.

PM Modi said, “We’ve decided that under India-Egypt Strategic Partnership we will develop a long-term framework for greater cooperation in the fields of politics, security, economics, and science.

Ahead of the Republic Day celebration Prime Minister Narendra Modi on Wednesday met Egyptian President Abdel Fattah El-Sisi at Hyderabad House in New Delhi. Both leaders posed for the cameras before the meeting.

Earlier on Tuesday, Egyptian President Abdel Fattah El-Sisi came to India. El-Sisi will be the chief guest of the 74th Republic Day celebrations.

Moreover, President Droupadi Murmu will address the nation on Wednesday on the eve of the 74th Republic Day. The address will be broadcast from 7 PM on the entire national network of All India Radio.

However, for Republic Day Traffic advisory for roads has also been issued and for the general public certain roads around Parade Ground, Sector 17, will remain closed from 6.30 am on 26 January.

After completion of the Parade and other cultural programs at 1 pm Sectors 16-17-22-23 up to Gurdial Singh petrol pump, Sector 22 A on Udyog Path; from Old District Court, Sector 17, up to Shivalik Hotel on the back side of the Parade Ground and from Lyon’s Restaurant signal near MC Office Sector 17 up to Parade Ground will open.

Furthermore, during the Republic Day Parade on Thursday Delhi Metro train service will remain available for commuters at all stations, and only on Central Secretariat and Udyog Bhawan metro stations boarding and de-boarding will be permitted from 5 am to 2 pm.