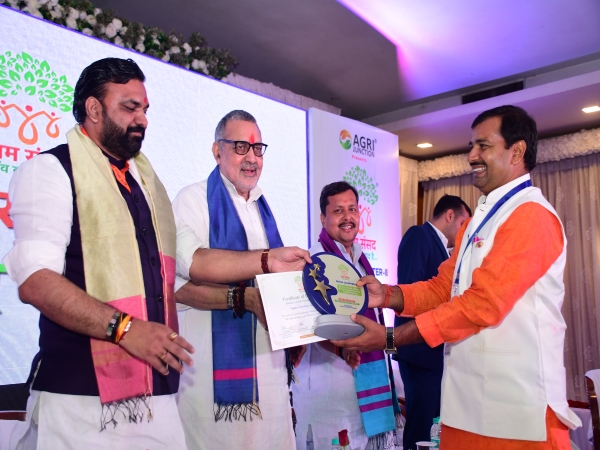 The Gram Sansad recognised Mukhiya Digambar Mandal for his outstanding performance in his panchayat. At a ceremony held by the Gram Sansad, the honorary title “Adarsh Mukhiya” was bestowed on him. He was given this title by both the Panchayati Raj Minister of the Government of Bihar, Samrat Chaudhary, and the Union Minister of Panchayati Raj, Giriraj Singh.

He asserted that it was a great moment for the Babhangama Panchayat when it attained recognition and notoriety on a national level.

According to Giriraj Singh, the Union Minister for Panchayati Raj, numerous programmes are being implemented to strengthen the panchayats, and they are also showing results. The amount of money from central and state government initiatives is now paid directly to the panchayats, which have performed better work, in an effort to reduce corruption. He has also been cited as an example.

Samrat Chaudhary, the Bihar Minister for Panchayati Raj, claimed that Gram Sansad Chapter-II provides an opportunity for direct communication with the chosen Panchayat representatives of Bihar. He declared that the state administration of Bihar is totally committed to bolstering the Panchayati Raj system. Everywhere, the Center for Panchayats’ supported programmes are operating without a hitch. Panchayat delegates’ security is useful for hastening development projects, and the government takes concerns like resolving basic difficulties very seriously. The Panchayat Raj Sarkar Bhawan, which would enable its residents to take advantage of all government programmes under one roof, is now being built throughout the panchayats of Bihar.

Babhangama is to become a high-tech village where everyone has a job and pucca houses, according to Mukhiya Digambar Mandal. His town should have internet access just like cities do, and modern farming methods can increase the yield of products like papaya and dragon fruit. The state’s population won’t need to leave if the condition of the villages improves. They will all be able to make a fine living from here. In order to accomplish his vision for 2030, he wishes to make his community well known throughout the country.