Did my best in low-scoring final: Yashaswini Deswal after winning gold 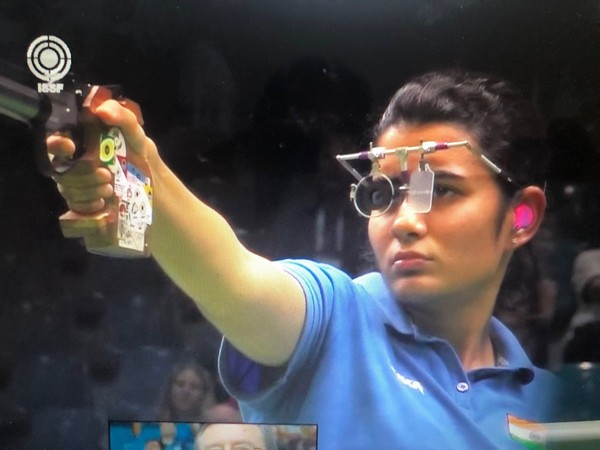 New Delhi [India], March 20 (ANI): After winning the first gold medal for India in the Women’s 10M Air Pistol final of the International Shooting Sport Federation (ISSF) World Cup Rifle/Pistol/Shotgun on Saturday, Yashaswini Deswal said that she did her best in a low-scoring final.
“I was trying to do my best. This was one of the two international competitions before Olympics so I had to focus on my mental temperament and my technique. I was happy that three of us were in final and ultimately competition was with myself only because who can win with oneself can win against the world,” Deswal told reporters.
“See the situation is same for everyone not just for me. The only thing I thought was my technique. It’s a work in progress. I did my best today and I will keep trying to do my best. It was low scoring final but I did my best. I will improve and all of us will. This medal will surely help to boost my morale and confidence,” she added.
Deswal accumulated 238.8 points to lead in her category. Another Indian shooter Manu Bhaker won a silver medal with 236.7 points.
Earlier in the day, world number one shooter Divyansh Singh Panwar clinched the bronze medal in 10m Air Rifle (men’s category) and opened India’s medal account in the
competition.
Divyansh shot 228.1 which got him the third position while Arjun Babuta finished at the fifth position, narrowly missing out on a medal. Lucas Kozeniesky of the USA won the gold medal while Hungarian shooter Istvan Peni took home silver in the mega event.
Divyansh was nervous ahead of the final but with his coach’s help, the world number one opened India’s account in the medal tally on Saturday.
“I am happy with this medal and I will work hard and try to get gold in the future. I was nervous when the final started. My heartbeat also was also high but the coach helped me during the event and I made my comeback,” Divyansh told reporters here.
“Usually final takes place on the same day of the event but this is the first time when final happened next day. But for me everything was fine as I slept well and there was no pressure at all,” he added. (ANI)