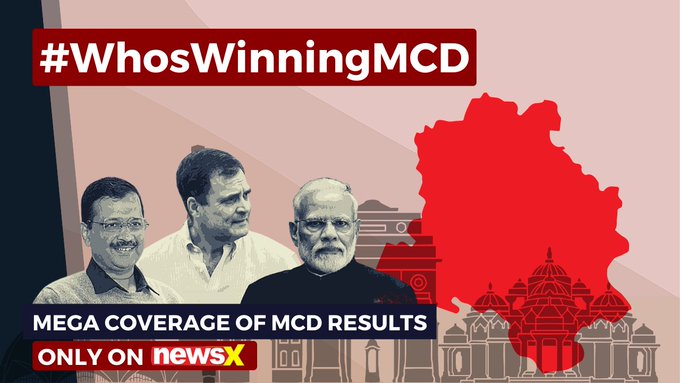 The counting of votes for 250 wards of the Municipal Corporation of Delhi (MCD) is completed and in neck-and-neck contest between AAP and BJP, AAP has won the MCD elections.

The Aam Aadmi Paty (AAP) leads in 134 seats, Bharatiya Janata Party (BJP) in 104 seats, Congress in 9 seats, and Others in 3 seats. At Arvind Kejriwal’s residence the supporters of AAP has gathers with flowers.

Results have come on 240 seats of Municipal Corporation of Delhi in which BJP wins 99 seats, AAP wins 131, Congress wins 7 and others 3 as counting continues. The celebration at the party office has begun by the AAP workers.

Talking about AAP, Aam Aadmi Party’s Sarika Chaudhary gains victory in Daryaganj ward, Pinky Tyagi has won in Ward no. 159 Chattarpur and 129 others.

So far initial trends 12 pm AAP is leading in MCD elections, BJP is on second place and Congress once again failed to impress voters despite doing Bharat Jodo Yatra.

Earlier in the day, Delhi BJP Vice President Rajiv Babbar expressed confidence over the win of BJP in MCD elections and said, “We believe in democracy. The people of Delhi are very smart. We are not like Arvind Kejriwal who writes in advance that they are winning. The people notice everything, from AAP leader in jail to corruption.”

Babbar said, “We are going to cross 125 seats. It will be clear after an hour and we are confident that BJP is going make its mayor.”

Moreover, the civic polls are largely seen as a three-way contest between the BJP, the AAP, and Congress.

However, if AAP wins in the MCD elections then the first Delhi Chief Minister Arvind Kejriwal-led AAP will rule the municipal corporation of the national capital.

Furthermore, exit polls predicted a poor performance by Congress and once again the party has failed to revive itself in Delhi.