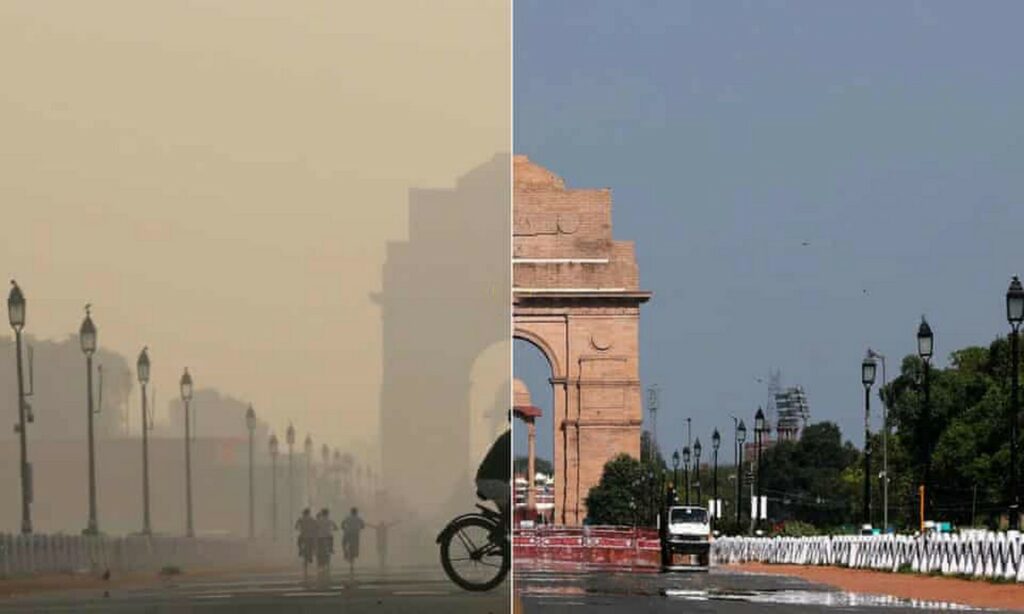 The air quality in the national capital and surrounding areas on Sunday worsened drastically, leading to a ban of construction and demolition activities. Authorities in Delhi have issued fresh restrictions on construction work and demolition activities.
Delhi’s 24-hour average air quality index (AQI) stood at 407 at 4 pm on Sunday, however, at one point it reached 447. Following this, CAQM directed the authorities to impose a ban on all construction and demolition activities in Delhi-NCR, except in essential projects.
The ban will be effective under Stage III of the Graded Response Action Plan (GRAP).
In fact, the air quality has been very poor during the weekend. On Saturday and Sunday, the national capital woke up to smog with very poor AQI. Noida on Saturday also recorded ‘very poor’ AQI on Sunday at 379.
The announcement came after the air quality in Delhi and the national capital region worsened again, breaching the ‘severe’ category. The CAQM, which on Sunday chaired a meeting to review the air quality in Delhi-NCR, put out a release saying, “As the AQI in Delhi has slipped into ‘severe’ category, the sub-committee had decided that all actions, as envisaged under Stage III of the GRAP, be implemented in right earnest by all the agencies concerned, with immediate effect in the NCR, in addition to all action under Stage I and Stage II of the GRAP.”
The panel further observed that the air quality saw a further deterioration over the last 24 hours, with Delhi’s overall Air Quality Index (AQI) at 407 on 4 December, according to Central Pollution Control Board (CPCB).
In its order CAQM said, “All private construction activities are banned under this action plan. Apart from construction, demolition activities are also banned except for projects related to rail services or rail operations, metro projects, airport projects, ISBT projects, projects related to national security or defence, projects of national importance, and healthcare facilities. Sanitation projects, highways, roads, flyovers, over bridges, power transmission, and pipeline laying are also allowed during this period.”
“Brick kilns and hot mix plants not operating on clean fuels are also prohibited from carrying out any activities in a bid to reduce pollution levels. Additionally, all mining and activities associated with it are also not

allowed. However, industrial operations involving milk and dairy units and those involved in the manufacturing of life-saving medical equipment, drugs, etc are exempted from such restrictions,” as per the statement.
It further said, “Road constructions or repair works including paving of sidewalks and pathways and central verges etc. are not permitted during this time. But construction projects which involve plumbing works, interior decoration, electrical works, and carpentry-related projects are permitted to continue, as per the notification.”