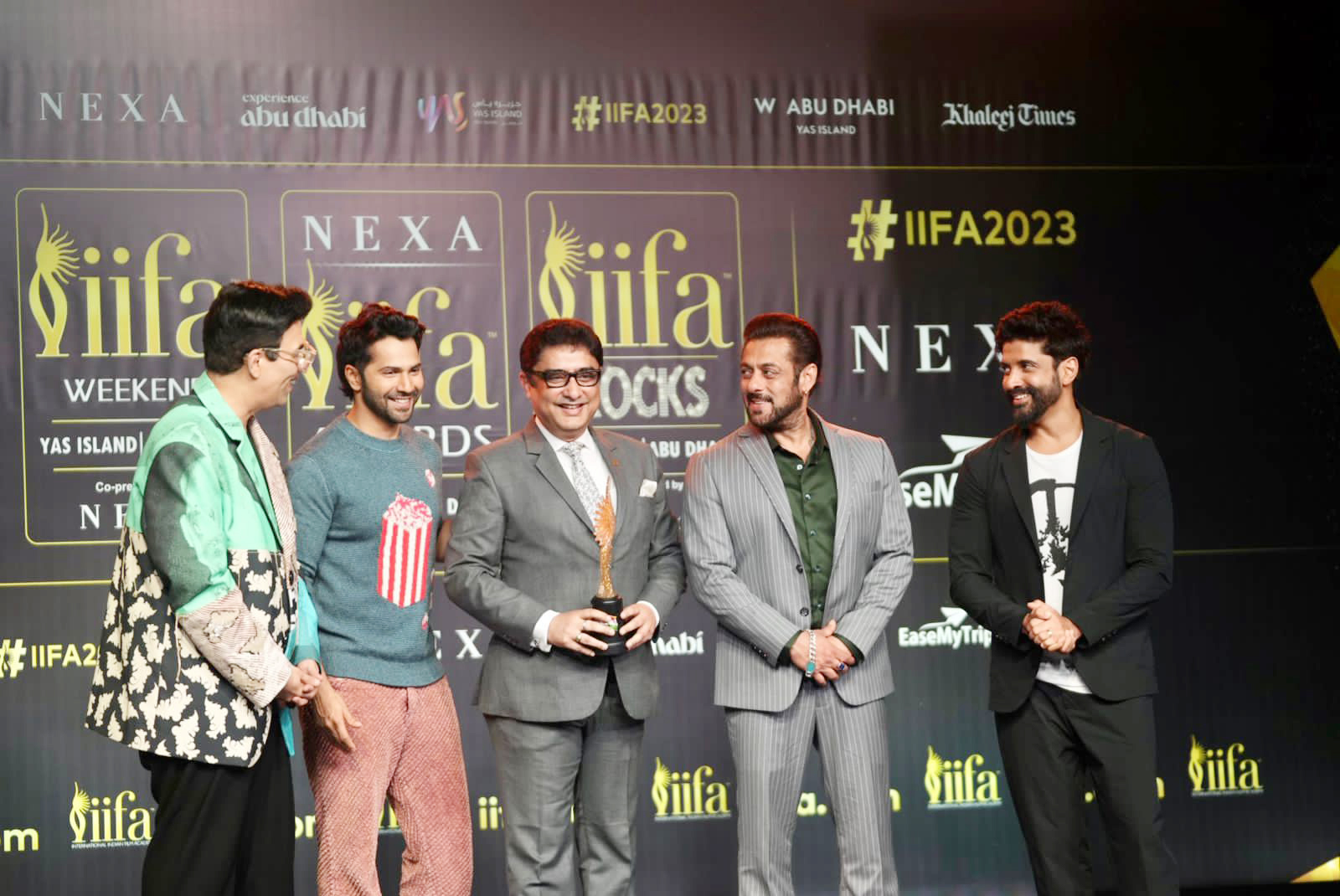 The biggest celebration of Indian cinema, the International Indian Film Academy and Awards (IIFA), returns with its 23rd edition to Yas Island, Abu Dhabi, on 9, 10 and 11 February 2023.
To kickstart the countdown, a press conference was held in Mumbai. Present on the occasion were Salman Khan, Farhan Akhtar, Varun Dhawan, Maniesh Paul, Karan Johar, Farah Khan, Badshah, Sunidhi Chauhan, Amit Trivedi, and Nucleya, who will take centre stage with other Bollywood A-listers like Ranveer Singh, Kriti Sanon, Nora Fatehi, Jacqueline Fernandez, Rakul Preet Singh, and many more at the mega grand awards.
They were joined by Nouf Al-Boushelaibi, Director of Strategic Marketing & Communications at DCT Abu Dhabi, Executive Director of Group Communications and Destination Marketing, Miral – Taghrid AlSaeed and Shashank Srivastava, Senior Executive Director, Marketing and Sales, Maruti Suzuki India, and Nishant Pitti, CEO and Co-Founder of Ease My Trip.
The highly-anticipated event is being held in collaboration with the Department of Culture and Tourism – Abu Dhabi (DCT Abu Dhabi), and Miral, Abu Dhabi’s leading curator of immersive destinations and experiences. NEXA continues its partnership as the title sponsor for the seventh consecutive edition.
Salman Khan, who has been a part of the IIFA family for over two decades now, said, “I am glad to be going back to Yas Island, Abu Dhabi. Last edition, I hosted the awards with Ritesh Deshmukh and Maniesh Paul and made everyone present not just laugh, but cry too, as I opened my heart to them. This time, I promise to make them stand up and dance with me as we celebrate Indian cinema globally,” he asserted.
The IIFA stage will also be lit up with the best of Varun Dhawan. The versatile actor, who won trophies in 2015 and 2017 for his performance in a comic role, is delighted to perform for the third time. “IIFA for me is an unmissable experience and I can’t wait to be back in my favorite city. It’s a stage that allows me to connect with fans from all over the world, and I am going to ask them to watch out for the Bhediya,” the actor quipped, drawing appreciative laughter for his tongue-in-cheek humour.
Also in attendance at the media interaction was Farhan Akhtar, who will be taking over the baton from Salman Khan. Farhan will co-host the IIFA Awards with Abhishek Bachchan and Maniesh Paul. “I have been fortunate to be felicitated by the IIFA in a number of categories, from best debut to best actor, best-supporting actor, best director, best story, best screenplay, and best film. It gives you the biggest audience, and I am looking forward to engaging with and entertaining them in a new role,” an ebullient Farhan shared.
Co-host Maniesh Paul was equally gung-ho. “Last year, I hosted the IIFA Awards with Bhai (Salman Khan) and Riteish (Deshmukh). It was a blast! This year, it’s going to be as enjoyable, with Farhan and Abhishek. All glitz and glamour, laughter and hungama, talent and trophies aur hamara karnama, a night to remember,” he promised.
“I have globe trotted with IIFA for several years, and I’m super happy to rock the IIFA stage with Farah, next year in February. Naach, gaana, action, drama, IIFA Rocks is a surefire blockbuster every time, “ Karan Johar said.
Farah hosted IIFA Rocks this year with Aparshakti Khurrana, and she can’t wait to be back in Yas Island. “It’s one of my favorite places, IIFA is one of my favourite award shows; and Karan is one of my favourite people, even though he is always going Toodles on me. If you enjoy our Insta reels, make sure you catch us live, double dhamaka hoga as the world dances to our tunes,” she assured.
For Badshah, IIFA Rocks underlines Bollywood’s supremacy in the world of entertainment. “The phenomenal response to this live music concert every year across the globe underlines the popularity of Indian cinema and its music. I can’t wait to rule this stage, bring it on!” he roared.
Nucleya pointed out that “There is a reason why IIFA is called the Bollywood Oscars and IIFA Rocks is the pre-Oscar event, not to be skipped. It’s taken Hindi cinema, its music, dance, and fashion, across the globe. Twenty-two years and going strong. It’s been a journey of only highs!” he stated to thunderous applause.
Sunidhi Chauhan, the youngest IIFA nominee, reminded us that IIFA has grown from one starry night to a three-day extravaganza. “It is getting bigger every year, and still the heart wants more. And with IIFA Rocks, we will give you more,” she assured.
Amit Trivedi endorsed the opinions of his fellow participants, saying, “When we talk of hearts beating in sync, let me remind you that this time IIFA Rocks is bringing Valentine’s Day to you early. If that isn’t reason enough for a deluge of love, what is. IIFA is not just another stage, it’s a night to be lived and a memory to live with,” he emphasises.
The forthcoming edition of IIFA Rocks – the biggest musical extravaganza, will be hosted by Karan Johar and Farah Khan. It will feature live acts by several big names, including singer-composer Amit Trivedi, rapper-singer Badshah, singer Sunidhi Chauhan, and electronic music producer Nucleya.