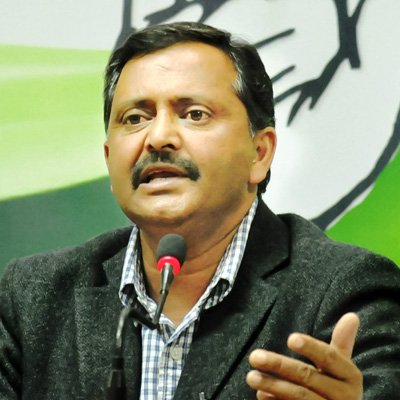 The Congress Party on Saturday alleged that the Bharatiya Janata Party (BJP) and the Himachal Pradesh government are misusing public funds on party campaigns ahead of state assembly elections.
The chief spokesperson of the Himachal Pradesh Congress Committee (HPCC) and chairman of the media wing, Naresh Chauhan, accused the state government of using public funds in the name of Azadi ka Amrit Mahtsov. He also attacked Smriti Irani for not doing anything about the farmers’ issues. Taking a dig at Smriti Irani, who addressed the Mahila Sammelan “Nari ko Naman” Programme in Himachal on Friday, Naresh Chauhan said, “Smriti Irani was protesting against the inflation with cylinders on the roads when LPG cylinders were Rs 400 rupees and now while the LPG cylinder is over Rs 1,100 today, she is mum on this. The farmers and apple producers are not getting the real cost of the fruit. They are not able to get even the cost of production. The Union and state governments have stopped subsidies for fertilizers, pesticides, and antiseptics. Smriti Irani did not speak anything on these issues.”
The Congress spokesperson, Alka Lamba, accused Union Minister Smriti Irani of “failing to answer the questions of women and the people of the state”.
“Smriti Irani was in Himachal Pradesh today. She failed to answer the women of Himachal Pradesh who are demanding to refill the LPG cylinders under the Ujawala Yojana. The people of the state and country are facing the serious issue of inflation. Smriti Ji should have addressed those issues of the farmers in Rampur who are growing apples and, due to the bad policies of the state and union governments, the farmers are being looted by PM Modi’s friends. The apple growers there are in distress, and she did not have any answers to the key issues. Instead of answering the issues of the people, she focused her speech on personal issues,” said Alka Lamba. On being asked about the special mobile digital vans to spread awareness about the development, Lamba said, “Had there been real development in the state, there would be no need for such propaganda.”