‘Missing Olympics by a whisker was terrible’

Want to be compared with PAK greats, not Kohli: Babar Azam

TEAM DYNAMICS: SHOULD TEAMMATES BE FRIENDS?

‘We have limited quality shooting ranges in India’ 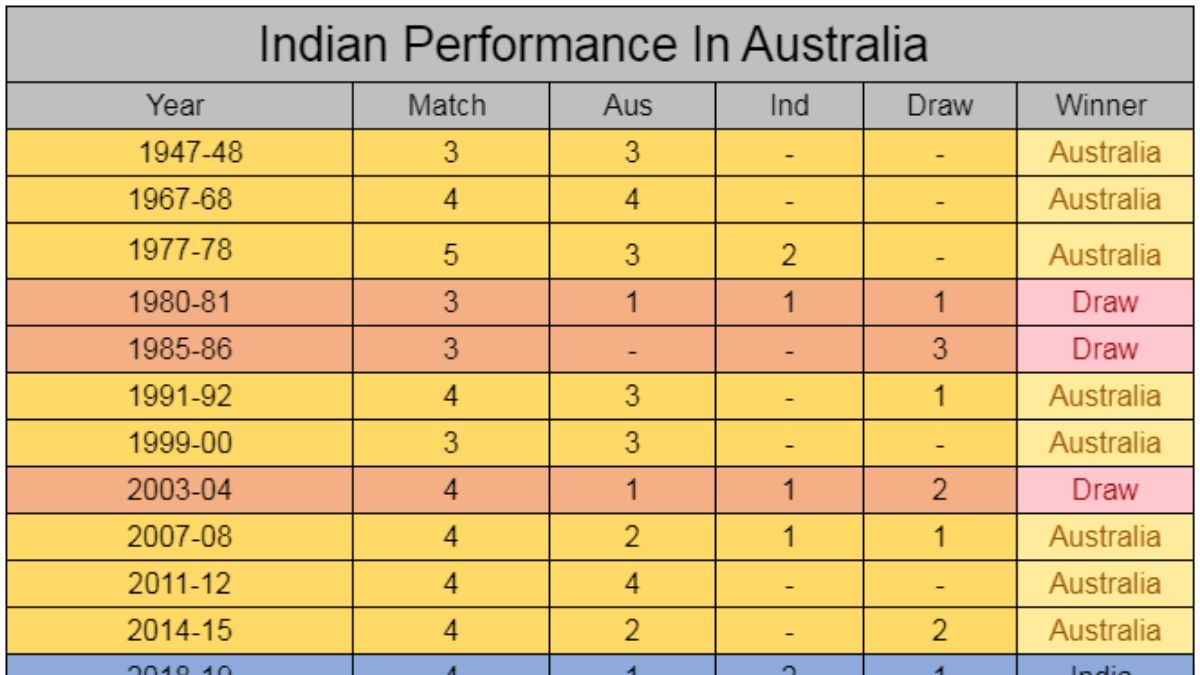 Cricket Australia on Thursday confirmed that India would make the trip Down Under starting October to play four Tests, along with ODIs and T20 Internationals. The first Test of the Border-Gavaskar Trophy will start from 3 December at The Gabba in Brisbane. In Brisbane, while hosting Test matches, the Australian cricket team has managed an undefeated streak for the last 32 years.

In Brisbane, India has lost five Tests and managed to draw one. Other venues include Adelaide, Melbourne and Sydney. In Adelaide too, Australia won seven Tests against India, and lost one, owing primarily to the talismanic performance of Cheteshwar Pujara and Ajinkya Rahane in the 2018-19 series. India has played numerous games at Melbourne and Sydney, and its record in Melbourne Cricket Ground (MCG) is better than the other venues in Australia.

At MCG, India has won three Tests, lost seven, and the remaining two games ended in a draw. In Sydney, Indian batsmen have had a good streak of scoring runs; however, those figures seldom brought them a victory. Australia has won seven Tests and lost one, with four games ending in a draw. Conspicuously, Brisbane Gaba is the only place in Australia where India has never won a Test. In the historic Test match during the 1977-78 tour, India was merely 16 runs away from victory.

In the match, Sunil Gavaskar scored a century and Syed Kirmani scored a half-century, but their attempts turned abortive when the team fell short of 16 runs. Pitches in Brisbane have comparatively a higher bounce, making it difficult for the batsmen to score runs easily. India has played a total of 45 Tests in Australia, losing 27, winning seven, and 11 matches ended in a tie. Out of the 12 Test series that India has played in Australia, India has just won one. In 1977-78, the Indian side was successful in registering the first win in Australia.

In that Test, Gavaskar scored a century and Bhagwat Chandrasekhar took six wickets for 52 runs in the second innings. The Indian team was led by Bishan Singh Bedi and the series was mouth-watering. India lost the next two Tests in Brisbane and Perth, respectively. In the cliff-hanging decider at Adelaide, India had to chase the target of 493. However, India’s valiant effort ended with the score at 445, giving Australia a well-deserved 47-run win. In the last tour of Australia, in 2018-19, India did the impossible and made history by winning Tests in Adelaide and Melbourne.

Cheteshwar Pujara and Virat Kohli made the best use of their resources. One should, however, never forget that in the 2018-19 series, David Warner and Steve Smith were not available for Australia due to a ban for ball-tampering. Many cricket experts, including Pakistani cricketer Waqar Younis believe India won because of the unavailability of the two cricketers. As for the coming series with Australia, a major challenge for the Indian team would be the daynight Test match in Adelaide. It would be India’s first day-night Test abroad. Australia excels in this format, while India has so far played only one that too against Bangladesh.