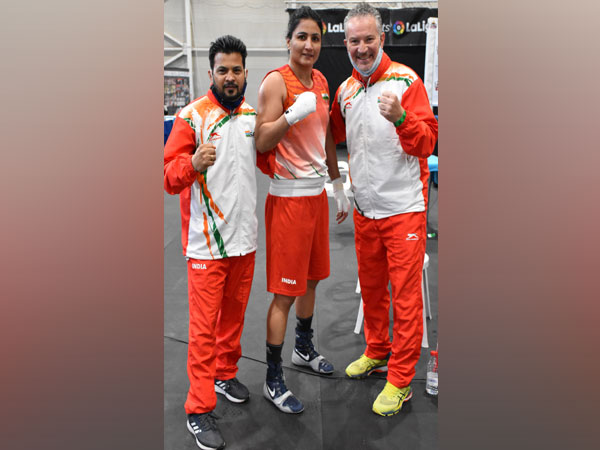 Pooja dominated her opponent from the beginning and looked unfazed throughout and assured a unanimous win. She will now square off against Melissa Graham of USA in the final. Other women boxers joining Pooja in the final are debutant Jasmine (57kg) and Simranjit (60kg).

Young Jasmine, who is playing her first senior international tournament showed great composure and played from distance to ensure a comfortable 4-1 win over Italy’s Sirine Charaabi. She will be up against European Champion Irma Testa in the gold medal bout.

World Championship Bronze medallist Simranjit was up against veteran Puerto Rican Boxer Kiria Tapia and in a close encounter which saw both the boxers trade a series of punches, some intelligent ring craft by the Indian ensured a close 3-2 win over her senior opponent. Simran will take on World Championship Bronze medallist Rashida Ellis in the final bout.

However, it was a flawless day for the Indian male boxers as all 6 of them marched into the finals.
CWG bronze medallist Mohammed Hussamuddin (57kg) continued his fine run and displayed technical superiority over Panama’s Orlando Martinez to win 4-1. He will be facing Puerto Rico’s Paul Rivera in the final.

In the light welter-weight category, World Championship bronze medallist Manish Kaushik (6kg) found the going tough in the first round against France’s Lounes Hamraoui but made a strong comeback in the last two rounds to notch up a close but strong 3-2 win. Kaushik will be fighting for the yellow metal against Denmark’s Nikolai Terteryan.
Vikas Krishan (69 kg) who defeated Olympic bronze medallist Vicenzo Mangiacapre in the quarter-finals, continued his dominance and defeated two time World bronze medallist Ablaikhan Zhussupov in a busy bout which saw both the boxers playing an attacking game. However, Vikas ended on the winning side with a split 3:2 verdict in his favour. He will face local boy Youba Sissokho in the final.
Other Indian male boxers to shine in the semi-finals were Ashish Kumar (75kg), Sumit Sangwan (81kg) and Satish Kumar (91+kg) as they outclassed their respective opponents and sailed into the final comfortably.

Earlier, six-time World Champion Mary Kom (51kg) went down against USA’s Virginia Fuchs. With 10 medals already confirmed, 9 Indian boxers — 6 men and 3 women — will be in action as they look to win the gold medal later on Saturday. (ANI)