‘Bomb blast in Mangaluru looks like an act of terror’: Karnataka CM Bommai 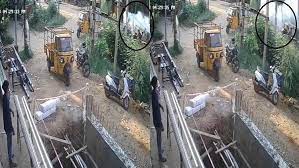 The family of the accused in the Mangaluru autorickshaw blast on Monday arrived at the hospital to meet their son. The accused has been identified as Sharik. He has been admitted to the Father Muller Hospital in Karnataka’s Mangaluru after sustaining 40-50 per cent burnt injuries due to the fire that broke out in an autorickshaw in the Kankanadi police station area at around 5 pm on Saturday.

The auto driver and the passenger sustained burn injuries and have been admitted to the hospital, the Commissioner of Police (CP) of Mangaluru City N Shashi Kumar said on November 19. “There was an attempt to disrupt harmony in the area,” the senior police official said. ADGP Kumar also informed that the blast was a low-intensity explosion.

“It was a low-intensity IED explosion. There was an attempt to disrupt harmony in the area, and it was averted. Right now we’ve no info to suggest this blast related to the Coimbatore blast,” he added.

According to the police, the auto driver identified as Purshottam Pujari had sustained 20-25 per cent burnt injuries and is being administered required medical aid for his survival as ‘he needs to be interrogated’.

The other day, Karnataka Chief Minister Basavaraj Bommai indicted the man injured in the blast could have terror links. “The bomb blast in Mangaluru prima facie looks like an act of terror and the government would crack this case,” Bommai said adding that an IED exploded inside a pressure cooker in an auto rickshaw in Mangaluru on Saturday evening. “All of you are aware of the blast in Mangaluru yesterday at 4.45 pm. Two including the auto driver and passenger are under treatment. The state police are investigating the matter and as per the primary information, it was because of an IED instrument,” Bommai added further. CM also mentioned that o=police are investigating the fake adhaar card that he was carrying.

Another macabre murder in Delhi, Chopped husband into 10 pieces