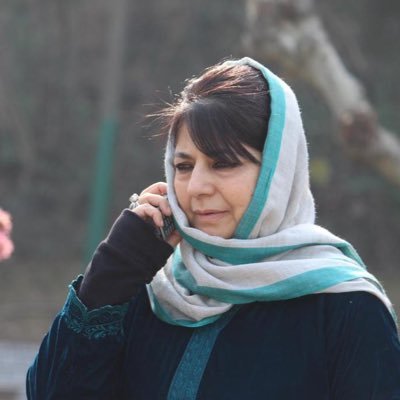 After former Jammu and Kashmir Chief Minister Mehbooba Mufti accused the central government of spreading the BJP’s “Hindutva” agenda, senior Bharatiya Janata Party leader and former J&K Deputy Chief Minister Kavinder Gupta slammed the PDP leader for making everything controversial.
Gupta called out Mufti’s remarks, Gupta said, “May the PDP leader be blessed with good thoughts. Mehbooba Mufti tries to make everything controversial. She has been trying to mislead the public regarding the bhajan ‘Raghupati Raghav Raja Ram’ being sung in a school in Kashmir.”
He further slammed Mufti and said, “The bhajan also has ‘Ishwar Allah tero naam, sabko sanmati de bhagwaan’. May Mehbooba Mufti get this sanmati.”
His remarks came after the PDP leader on a micro-blogging site shared a video from a school in the valley. The school is located in Kulgam, where the teachers can be seen singing a bhajan while the students join in the tune and wave their hands.
Taking to twitter, she slammed the government and wrote, “Jailing religious scholars, shutting down Jama Masjid and directing school kids here to sing Hindu hymns exposes the real Hindutva agenda of the government of India in Kashmir. Refusing these rabid dictates invites PSA and UAPA. It is the cost that we are paying for this so-called ‘Badalta J&K’.”
Earlier on September 13, Mufti had accused the BJP of trying to divert people’s minds from unemployment and inflation to communally sensitive issues.
“The courts had ruled that the 1947 status quo of religious places should be maintained. The BJP has failed to eliminate unemployment, poverty, and inflation. So, they want to divert people’s attention. The High Court’s ruling supports this BJP narrative,” Mufti told the press.
Her remarks came after the Varanasi Court had dismissed a plea of the Anjuman Islamia Masjid committee challenging the maintainability of the suit filed by five Hindu women seeking worshipping rights in the Gyanvapi mosque compound.
District Judge AK Vishvesh delivered the verdict in the Gyanvapi Shrinagar Gauri dispute case and posted the matter for further hearing on September 22. “The court rejected the Muslim side’s petition and said the suit is maintainable. The next hearing of the case is on September 22,” said Advocate Vishnu Shankar Jain, representing the Hindu side in the Gyanvapi mosque case.
“It’s a win for the Hindu community. The next hearing is on September 22. It’s a foundation stone for the Gyanvapi temple. Appeal to people to maintain peace,” said Sohan Lal Arya, petitioner in the Gyanvapi case.
The petition was filed by five women seeking permission for daily worship of Hindu deities whose idols are said to be located on the outer wall of the Gyanvapi mosque, which is located close to Kashi Vishwanath temple. A Varanasi court ordered a survey of the mosque complex following this.
Following this, a local Varanasi court ordered a videography survey of the complex in May. The survey work was completed on May 16 and the report was presented in court on May 19. After the videography survey, claims were made by the Hindu side that a structure resembling a Shivling was found in the mosque complex, but the Masjid committee contested that it was a fountain and not a Shivling.
The court rejected the Muslim party’s petition and said the suit is maintainable. The next hearing in the case is on September 22.