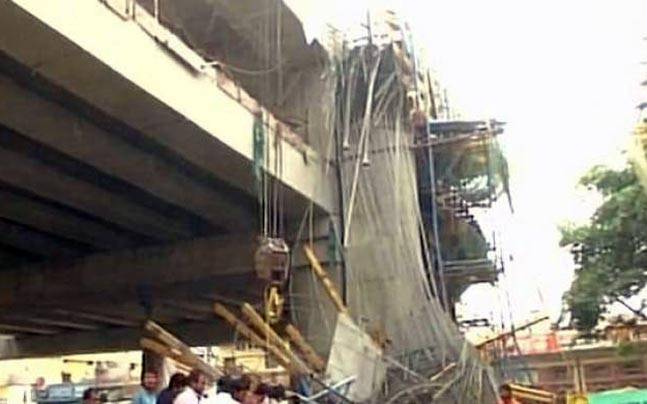 In an unfortunate incident a woman and her toddler son were killed after an under-construction metro pillar collapsed near Nagavara on the outer ring road in Bengaluru on Tuesday morning, police said.
While the woman and her two-and-a-half-old son succumbed to their injuries in hospital, her husband and daughter have been hospitalised with injuries. The four of them were traveling on a bike when the incident took place.
Bheemashankar S Guled, DCP East Bengaluru said, “This morning around 10:45 am, when the couple along with their twin children were travelling towards Hebbal when the metro pillar collapsed on the bike. The mother, Tejaswini and son Vihaan were seriously injured and shifted to Altis Hospital where both of them succumbed to their injuries. “
Forensic experts are at the incident site and are investigating the DCP said.
More details awaited.

Karnataka CM Bommai announced an ex-gratia of Rs 10 Lakh for the family of the deceased women in the metro pillar collapse case after a meeting with the district-level officials in connection with the visit of Prime Minister Narendra Modi to Hubballi on 12 January that he has sought the details of the mishap. “It’s a most unfortunate incident. Instructions are given to order a probe to find out any lapses on the part of the contractor or other reasons. The family of the deceased will be given an ex-gratia of Rs 10 lakh will be given,” he said.
Congress MLA Sowmya Reddy on Tuesday demanded the resignation of Bommai after an under-construction metro pillar collapsed.
“Karnataka Chief Minister must resign. It’s a clear case of poor work and people have succumbed to it. Now, people of Bengaluru and Karnataka are fed up,” Congress MLA Sowmya Reddy said. “It’s very shocking that an under-construction pillar fell on a woman and child. Until now there were pothole deaths now pillars are collapsing. This is a clear case of violation, negligence and corruption of the BJP govt,” Reddy added.