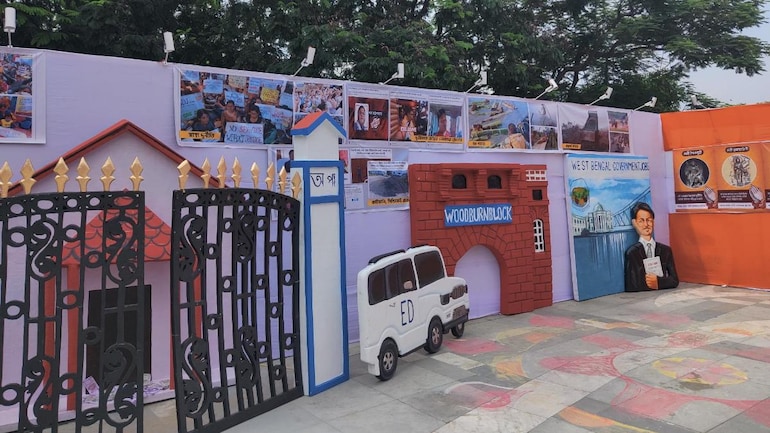 Using a pandal in Kolkata with a corruption theme, the Bengal BJP has targeted the administration. The Durga Puja pandal prominently displays cut-outs and pictures of Partha Chatterjee and the Bengal education scam.

Amit Shah, the Union Home Minister, was invited to inaugurate the event. However, he was unable to attend because of prior obligations in Gujarat. The Gujarat Home Minister is there for the Navratri celebrations.

The BJP has developed a theme for this year that highlights alleged corrupt practises of Trinamool Congress politicians in Bengal. Partha Chatterjee, a former minister from Bengal who is suspected of corruption, and the Bengal education scam are depicted in cut-outs and other graphics as part of the BJP’s theme that directly criticises the ruling party for corruption.

“Puja is being done in a very traditional way. However, people who visit the pandals will get to see whatever is happening in the state,” actor Rudranil Ghosh, head of the BJP’s Sankritik Manch, told India Today.

Kailash Vijayvargiya and former BJP leader Mukul Roy are thought to have created the cultural organisation. According to sources, some officials disagreed with the notion of holding the puja under a party banner. Mukul Roy, Babul Supriyo, and Arjun Singh were just a few of the leaders who quit to join the TMC in 2021 after being photographed leading the puja. The party’s cultural brigade also included a number of actors and movie stars who later disbanded.