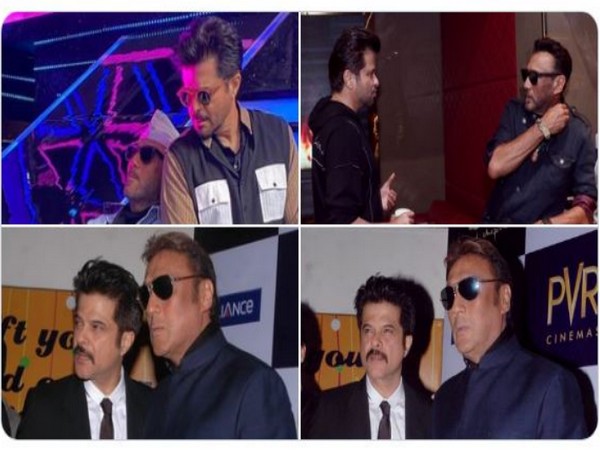 New Delhi [India], March 5 (ANI): The powerhouse entertainer duo of Bollywood, Anil Kapoor and Jackie Shroff teased fans about their upcoming collaboration through a witty post on Friday.
Whether it is the iconic 80s film ‘Ram Lakhan’ or 90s ‘Roop Ki Rani Choron Ka Raja’, the reel brother duo has always entertained their audience with their astonishing performances together on the big screen.
The evergreen actor Anil Kapoor has often played the role of a younger brother to Jackie Shroff in the movies and their collaboration has always proved to be a blockbuster hit in the silver cinema.
Teasing their fans about their new collaboration, Kapoor hopped on to the Instagram story and shared two candid pictures of them. In the pictures, the ‘Mr. India’ star wrote two witty imaginary dialogues being exchanged between them.
On the first snap, he wrote, “@apnabhidu to me: Mai firse 16-17 thappad maarunga jaisa ki maine Parinda me maare the, agar nahi bataya ki humaari film kab shuru hogi,”
(I will again give you 16-17 slaps just like I did in Parinda, if you will not tell me when our film will start). 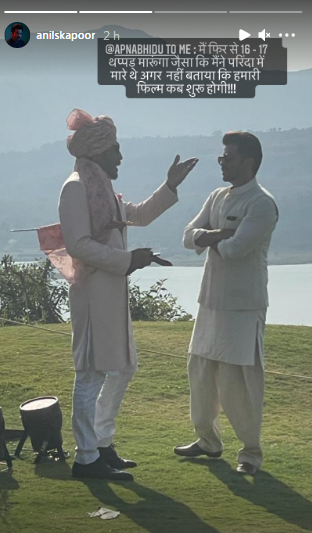 Whereas, in the next picture, Kapoor is seen replying him, “Me to @apnabhidu: Bahut jald… Script par kaam chal rha hai!!!”
(Super soon…Script is under process!!!) 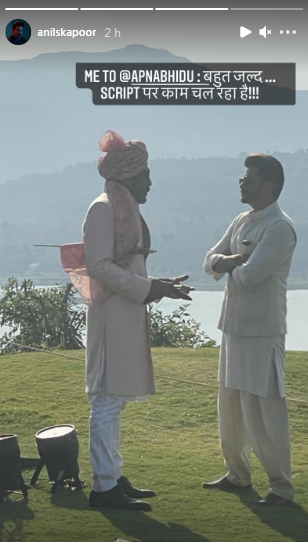 Both the actors last worked together in 2001 drama ‘Lajja’ which was a major commercial hit in the overseas. The film also starred veteran superstar Rekha, Madhuri Dixit and Manisha Koirala with Ajay Devgn in a supporting role.
Besides this, the duo have given blockbusters like ‘Ram Lakhan’, ‘Kabhi Na Kabhi’, ‘Trimurti’, ‘1942 A Love Story’, ‘Roop Ki Rani Choron Ka Raja’, ‘Parinda’, ‘Kala Bazar’, ‘Karma’, ‘Yudh’, ‘Andar Baahar’.
Meanwhile on the work front, Anil Kapoor was last seen in Anurag Kashyap’s ‘AK Vs AK’, which streamed on Netflix. The comedy-thriller also featured Sonam Kapoor. Kapoor will be next seen in Raj Mehta’s directorial ‘Jug Jugg Jeeyo’ along with Varun Dhawan, Kiara Advani, and Neetu Singh in lead roles.
Besides this, he also has Bhushan Kumar, Sandeep Reddy Vanga, and Murad Khetani’s ‘ANIMAL’ with Ranbir Kapoor and Bobby Deol in the pipeline. (ANI)