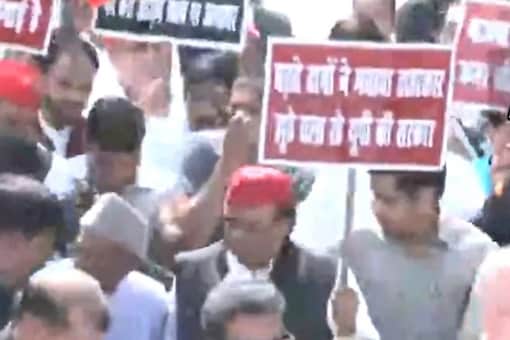 Akhilesh Yadav led a legislators’ agitation to the Uttar Pradesh legislature on Monday against the Yogi Adityanath administration, reportedly his first such foot march. The large march, which took place before the assembly’s monsoon session began, was held amidst a strong security presence.

An alternative route was opened while the police permitted the pad yatra. The massive foot march included not just Samajwadi Party MPs but also party leaders.

Akhilesh Yadav, who had emerged as the main opposition to the BJP in the state polls earlier this year, was seen brandishing a banner critical of the Yogi Adityanath administration while surrounded by SP members. Party members screamed epithets critical of the ruling party around him. In addition to other problems, the Samajwadi Party has been criticising the BJP for rising prices.