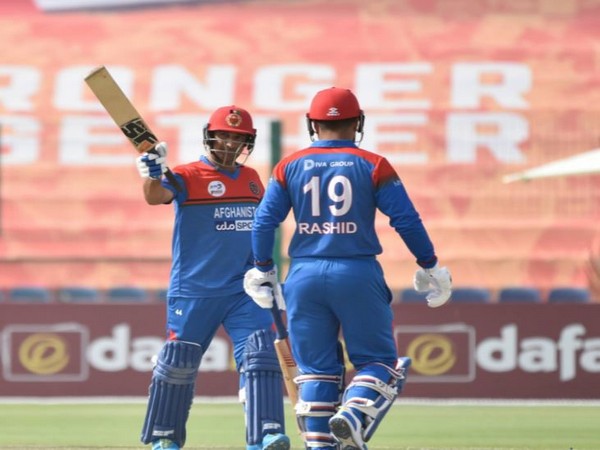 Abu Dhabi [UAE], March 20 (ANI): Afghanistan skipper Asghar Afghan has equalled Mahendra Singh Dhoni’s record of most wins as captain in the men’s T20Is. Afghan achieved the feat against Zimbabwe in the second T20I on Friday.
Usman Ghani scored 49 and Karim Janat hit fifty before Rashid Khan picked three wickets as Afghanistan clinched the three-match T20I series against Zimbabwe.
With the victory in the second T20I, Afghan registered his 41st win as captain equalling the record of former Indian skipper MS Dhoni, who had led India in 72 T20Is in which the Men In Blue won 41 games.
England skipper Eoin Morgan is third on the list with 33 wins while Pakistan’s Sarfaraz Ahmed has 29 wins as captain. Former West Indies captain Darren Sammy has 27 wins as a skipper is fifth on the list.
Meanwhile, Afghanistan spinner Rashid Khan is now the third-highest wicket-taker in men’s T20Is. He picked three wickets on Friday to leapfrog New Zealand pacer Tim Southee. Rashid has 95 wickets and is behind Shahid Afridi and former Sri Lanka bowler Lasith Malinga.
Last week, in the second Test, an 11-wicket haul for Rashid and record batting performances from skipper Afghan and Hashmatullah Shahidi helped Afghanistan level the Test series.
The match was a record-runner for the team as Hashmatullah Shahidi became the first Afghan double-centurion, Asghar became the first one to score 150 for Afghanistan while Rashid Khan ended with bowling the most number of overs this century so far.
In the first innings, Rashid returned with the figures of 4-138 from 36.3 overs while in the second innings, the spinner returned with seven wickets. Because of Rashid’s brilliance in the second innings, Zimbabwe only managed to set a target of 108 runs for Afghanistan which they chased down, riding on Rahmat Shah’s half-century. (ANI)